Player of the Week | Kirill Kaprizov

It was a memorable introduction to the NHL for Kirill Kaprizov. 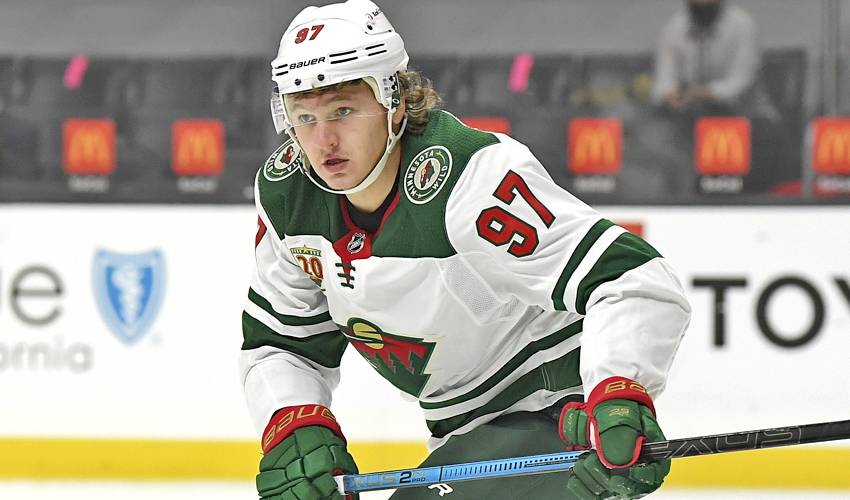 It was a memorable introduction to the NHL for Kirill Kaprizov, who played a key role in both of the Minnesota Wild’s overtime wins in the opening week of the 2020-21 season.

There was a lot of excitement leading up to the debut of the 2015 NHL Draft pick’s debut and he didn’t disappoint by registering three points in his first game against the Los Angeles Kings. The 23-year-old also became just the third player in NHL history to score the overtime winner in his debut.

His historic performance also earned him the honour of the Wild’s first “hydration bucket” which the team rewards to the MVP of each game.

Kaprizov had a goal and two assists including the overtime winner to help the Wild open the season with a 4-3 victory over the Los Angeles Kings at Staples Center Thursday evening.

Kaprizov earned his first NHL point as he made a nice move in the offensive zone before passing it off to teammate Jonas Brodin, who beat Jonathan Quick to give Minnesota a 1-0 lead.

With the Wild down 3-1 in the third period Kaprizov set up to Wild forward Victor Rask in the slot as he beat Quick to pull Minnesota within a goal. The Wild tied the game midway through the third period to force overtime, setting the stage for Kaprizov to play the hero.

Late in the extra period, Kaprizov jumped on a turnover and put the puck past Quick on a breakaway.

He became the first Wild player to score three points in his first debut and his teammates were so impressed with his performance that they came up with an interesting nickname for him. (reference)

''He gets a puck on a break and you see what he does,'' said defenseman Matt Dumba, who had an assist. ''Everyone who's watching the game can see that he's a special talent and that's why they call him Dolla Dolla Bill Kirill.''

For the second straight game, Kaprizov played a key role in an overtime win for the Wild as they earned their second-straight 4-3 victory over the Kings at Staples Center Saturday.

Minnesota overcame another multi-goal deficit in the third period with Ryan Suter scoring with two seconds left to send the game to overtime.

With 13 seconds left in the extra period, Kaprizov set up Marcus Johansson with a perfect pass as his one-timer beat Quick to give Minnesota their second win of the season.

Coming over from Russia, the 23-year-old admits that the mentorship of veteran forward Zach Parise has helped him get comfortable at playing in the NHL.

"It's great to have Zach help me," Kaprizov said in Russian through a translator. "Obviously, he's extremely knowledgeable about the game and he has a lot to offer. He always gives me little tips and advice throughout the game and in practice and in the season. And not just him. All of my teammates really help out.

"I feel very comfortable on the ice throughout practices and the games. But if I have a question or any concerns, I ask my teammates, my coaches, and everyone is very helpful."

Kaprizov will try to continue his strong start to his NHL career when the Wild’s next two two games get underway against the Anaheim Ducks Jan. 18 and Jan. 20 before a return to Minnesota for their first two home games of the season against the San Jose Sharks Jan. 22 and Jan. 24.