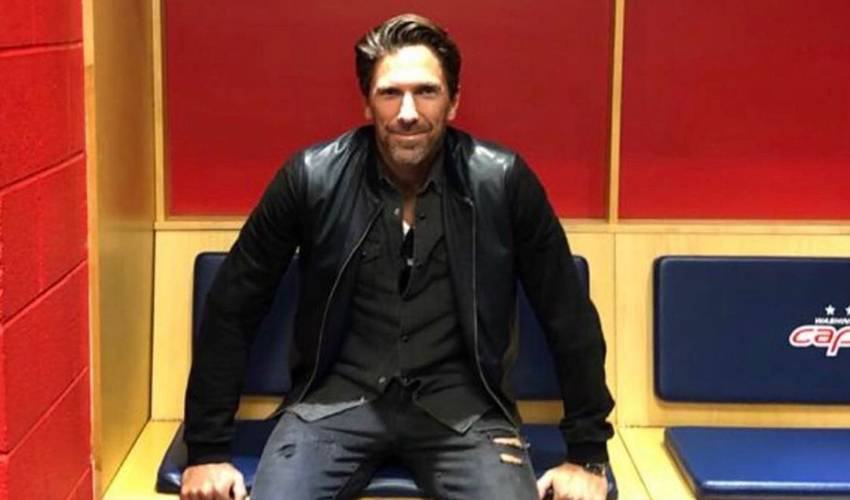 The King has a new crown.

Future Hockey Hall of Famer Henrik Lundqvist recently took to Instagram to share some colourful images of the new goalie mask and pads he’ll be wearing when he’s between the pipes for the Washington Capitals during the 2020-21 NHL season.

Designed by David Gunnarsson, one of the most famous and highly sought after mask artists in the hockey world, the new bucket is red, white and blue and showcases the Capitol Building along with a pair of eagles.

“I wanted a design focused on the things that really symbolize the Capitals,” Lundqvist told NHLPA.com. “The stars, the eagle and the team logo.”

Gunnarsson also took to social media to share his thoughts.

“It is with great joy that I unleash the latest mask artwork from my friend Henrik Lundqvist. It was truly special to create and paint this Capitals piece for Henrik. We brainstormed together on how to build the design and pretty fast we came up with a plan.

“Henrik wanted a completely new mask look,” added Gunnarsson in his post. “A totally new style for him. For example Henrik always on all his masks for more than 20 years had small electrical lightnings in the mask design, not on this one. It is a design which lives and breathe the city of Washington, it is a tribute to the fans of Capitals. A crisp and clean design, but loaded with detail work and storytelling.”

Lundqvist, who signed a one-year contract with the Capitals in October after spending the first 15 seasons of his NHL career with the New York Rangers, wanted to ensure the rest of his equipment meshed well with the mask.

Known for his stylish looks off the ice, the 38-year-old backstopper is equally fashion-forward when it comes to the on-ice look he sports.

“First step was to get the gear in place then I talked to David about the design of the mask,” said Lundqvist. “I feel like he did a really good job making the eagle come alive. It’s a new chapter for me to go play in D.C. after 15 years in New York City. Designing new gear, a new look, is just one of many new things I’m experiencing right now.”

The Are, Sweden, native ranks sixth on the NHL's all-time wins list, eighth on the NHL's all-time appearances list, and 16th on the league's all-time shutouts list. Lundqvist’s 459 career wins and 887 career appearances with the Rangers are the second-most a goaltender has recorded with one franchise in NHL history (trailing only Martin Brodeur with New Jersey). He’s earned more lifetime NHL wins than any other non-North American born goaltender, and he also reached the 400-win plateau faster than any other goaltender in league history (727 appearances).

Now, he’ll bring his talents to the U.S. capital.

“I’m forever grateful for the experience and all the memories in New York. I look at this next chapter as a great experience for me and my family. I look forward to getting the know the guys on the team and get going.”

Lundqvist and his family recently took a tour of Washington, soaking up the sights and sounds of the city. The moment was even commemorated in the 2021 Caps at Home calendar, released earlier this week by the club.

“The family really enjoyed D.C. a few weeks ago and they all look forward to getting even more familiar with the city as we get started.”

The Lundqvist family also had the opportunity to visit with a forward the netminder has become quite familiar with from facing off against and alongside him over the years, depending on the competition.

What was the most memorable moment of their visit?

“Best part for the kids was probably hanging out at Backstrom’s house and getting to play in his playland basement,” Lundqvist said with a laugh.

It looks as though The King won’t only feel right at home when the puck drops on the new season, he’ll also look right at home too.

With on-ice milestone in sight, Lundqvist makes impact away from rink

While his greatest masterpieces have come between the pipes, Henrik Lundqvist recently showed his creative touch outside of the crease.

It has been a dozen years since a Lundqvist won an Olympic hockey gold medal, but the younger of the Swedish twins Henrik and Joel hopes to end the drought.

G&D: A grassroots initiative for all

NHLPA Goals & Dreams ensures the great game of hockey is available to as many children as possible, a priority to the players. Learn more about the global, grassroots program in the final instalment of this three-part series.

Before he was dubbed King Henrik, the man behind the mask was inspired in the stands by Frölunda Hockey Club. Well, the King hath recently returned to his homeland — and bearing gifts to boot.