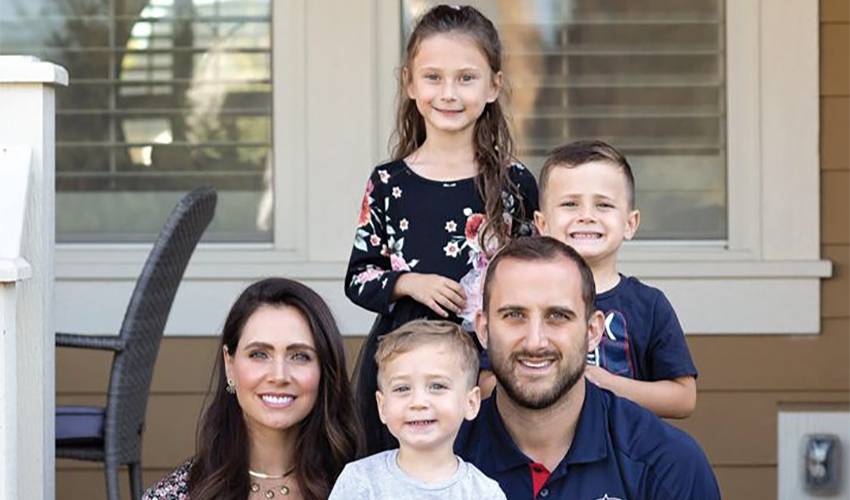 Nick and Janelle Foligno aren’t quite certain where the journey will take them, but they’re hoping to inspire others along the way.

Married for nearly nine years and parents to three young children, the Folignos have found out, more than once, that things don’t always go by the book.

Milana Foligno, the couple's daughter who turns seven in October, was born with a congenital heart issue that required a valve replacement when she was three weeks old. In November 2018, she was diagnosed with endocarditis, which eventually led to valve replacement surgery.

Two months later, in the midst of Milana’s struggles, the Folignos’ oldest son, Landon, now four, broke his leg. Not long after, Hudson, who is now three, contracted pneumonia and spent nearly a week in hospital.

Shortly after Landon got the okay to have his full-leg cast removed, Hudson became sick again with a collapsed lung and was in the ICU for almost a month

These days, all three of the Foligno children are thankfully doing well.

If some, or all of it, sounds like it would make for an inspirational book, that’s exactly what’s happened.

The Foligno family experiences also prompted the creation of an Instagram page, @theheartsplaybook.

Launched in May, The Heart’s Playbook serves as a platform for Nick and Janelle to share their life story and how they navigate obstacles and opportunity, as a way to inspire others.

“It came about organically,” said Janelle, of the idea for the book. “That started when Milana went through her second open-heart surgery. I’m one to write down my feelings more than I am speaking them aloud. I’ll either grab a journal or jot down notes on my phone. When she was going through her recovery process, I wrote her a poem. I left it in my phone, and then it turned out that I met an illustrator and we put both of them together and we ended up with this book, one we are going to use as a charity platform for various heart-related charities as we go along.

“The book is unique in that it’s geared toward kids and even adults who want to look back on their journey with a heart defect, heart surgery or any heart-related concern. It’s more of a niche market, but the goal is to raise money for people who are dealing with those issues. It will tie in the experiences we’ve had with Milana.”

Nick, who has captained Columbus since May 2015, recalled the day Janelle shared the idea of her writing a book.

“My eyes lit up because I could see the passion in her. A lot of the time, I’m the one that gets credit because I’m in the spotlight, but a lot of my ideas come from Janelle’s. I’ve learned a lot from her and it’s great that she’s now able to put that out in the world, and share the knowledge and leadership she has. And to be able to do this together, I think it will make our bond even stronger. You appreciate the chance to be a united front on the things we both care about. I’m glad she brought me along for the ride.”

One of the biggest hurdles for the couple was in opening up about the struggles they faced as a family in a very public way through social media.

When they discussed the pros and cons of pulling the curtain back on their personal life, one particular thought continually came up in the conversations.

“We’re pretty private people, but we’re realizing that we have a unique situation in some of the things that we’ve gone through at a young age,” offered Nick. “We just want to help people and inform people, and we think it’s the right the thing to do, in trying to make a difference.”

Support for Janelle’s foray into social media and the book [copies will be available in about a month’s time] has come from some familiar faces.

“I wanted to create the Instagram page to support that book. Both of my sister-in-laws [Nick’s sisters, Lisa and Cara], they are in marketing. They convinced me that instead of pigeonholing the book on Instagram, maybe I should focus on doing something a little larger to reach more people. So, once the book is out and rolling, it’s not just pigeonholed to just being about the book. We can share other community aspects that we’ve done.

“Nick and I brainstormed and we talked about the platform he has been given through hockey, to be able to do good. We always try to be involved in the different communities that we’re in, and with the foundation [the Janis Foligno Foundation] that honours his mother. We just really want to spread as much positivity as we can. This social media platform came about to try and do that. We’ll see where it goes, and hopefully, help as many people as possible.”

Initial feedback, including comments on Instagram posts, has been overwhelmingly positive.

The Folignos are hoping to see the trend continue.

Any fears Janelle had about sharing certain thoughts, the ones she typically writes down for herself, has given way to optimism for what she terms “a new adventure for us.”

“A lot of people, in one way or another, would like to see more of what we’re doing on social media. We’re just trying to start something. In one of my posts, I shared that I don’t quite know where it’s going to go, but I do know we are going to share from our heart and try to help and reach as many people as we can.”

It’s also a way, noted Nick, to say thank you.

“In going out on this venture, it’s reminded of us how many people have supported us along the way. Our biggest thing is to give back. We’ve always said how fortunate we are to have so many people in our corner throughout the things we’ve gone through in life. This is our way to show what that support has done, to provide people with hope.

“Going through a lot of things in life, you tend to look for as much information as you can to acquire as knowledge as you can to make the right decisions. Hopefully, this can be that for a lot of people who are going through the same thing us, or have similar life experiences. We have a great story to share and tell, and we’ll try to inspire as many people as we can.”

And it will be done with one goal in mind.

“We’re not trying to say we have all the answers,” said Janelle. “We’re just trying to give a glimpse into what we’ve gone through, how we deal with things, and hopefully through that, we can inspire others.”