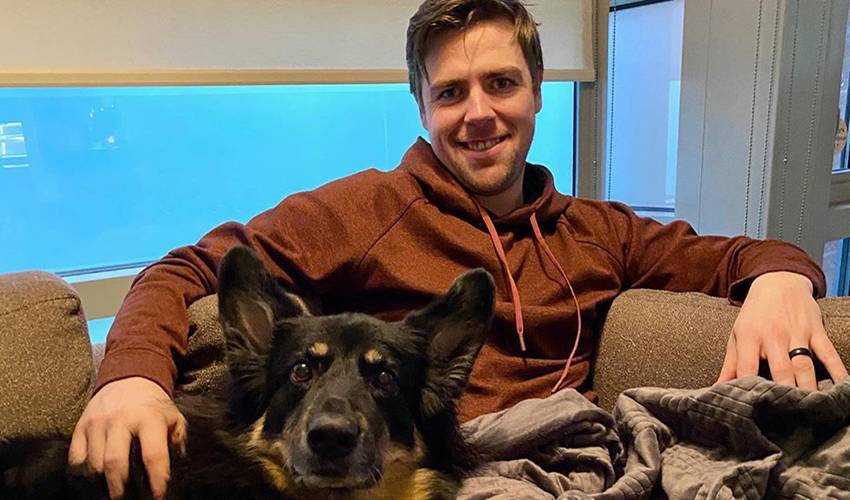 Before the puck dropped on the third period of Vancouver’s home game against Minnesota on February 19, fans at Rogers Arena were treated to the Canucks inaugural Top Dog Race, a competition that included six of the players’ beloved canine companions.

With most of the participants donning custom Vancouver Canucks jerseys with their father’s number on the back, Emma, along with Gus (Bo Horvat), Lilli (Jordie Benn), Riley (Chris Tanev), Zeus (Adam Gaudette), and Phoebe (Troy Stecher) took to the ice for the canine contest.

In the end, it was Emma Pearson, a seven-year-old German Shepherd-Collie mix, who took home top honours (and likely some extra dog treats).

Pearson (the player) was thrilled with the outcome.

“She’s still wiped out from all the excitement,” the 27-year-old forward told NHLPA.com. “She did a great job.”

Most importantly, Emma listened to the pre-race advice from her parents.

“All I told her was not to run out the Zamboni door this time,” quipped Pearson.

This wasn’t Emma’s first dog race title. In 2016, when Pearson was playing with the Los Angeles Kings, she won that year’s edition of Bark Madness, besting reigning champion Gustl Kopitar, Anze Kopitar’s prized pooch who was named the 2016 NHL Top Dog on Twitter.

Pearson and his wife, Meaghan, adopted Emma from the Kitchener-Waterloo Humane Society in 2013. Abandoned at an apartment and left outside in the winter, she was understandably wary of people at first.

“My wife rescued her,” started the 30th overall pick of the Los Angeles Kings in 2012. “I think she was seven months when we got her. Her name was already Emma, and we didn’t want to change it. The name was something she would be familiar with. She was very timid when we first got her, but now she’s a whole new dog.”

She’s also a good friend to the couple’s young son, Tucker, who was born last May.

There is, however, the odd dispute over bowl rights.

“They keep their own toys to themselves. Her and my son are really good friends, but as soon as we start feeding him in his high chair, she’s definitely not too far away in case something falls on the floor. She’ll pretty much eat anything. Now he’s trying to get her food dish and throw it around, but she lets him know it’s hers. She loves him and she always gives him kisses whenever we wake him up. She jumps on the bed and looks in his crib.

“And she’s pretty protective of him. Anyone that she doesn’t know that’s around him, she isn’t too fond of it until she gets to know the person.”

When she’s not keeping tabs on her little brother, Emma, who enjoys any chance to chase squirrels, does her best to convince her parents to take her for a walk.

It’s a word she knows well… perhaps a little too well.

“Any time you say the word ‘walk’ around her, she goes a bit bananas. If we have to go out without her, she makes you feel pretty guilty, just looking at you walking out that door. She has that look on her face any time that happens. But she just loves being outside. She could really be out there all day long if she had her choice. She sits on the patio and loves that too.”

While having the opportunity to defend her Top Dog Race title is still a ways off, there’s no doubt Emma has the skill-set to make it a hat trick of awards.

For her proud owners, that’s not what makes her top dog in their eyes.

“She’s always in a good mood when you walk through that front door. She’s so happy to see you, and that automatically puts a smile on your face. Being around her, it just makes everything better.”

And just like her dad, Emma Pearson is the ideal teammate to have in the room, and on the ice.