Player of the Week | Victor Hedman 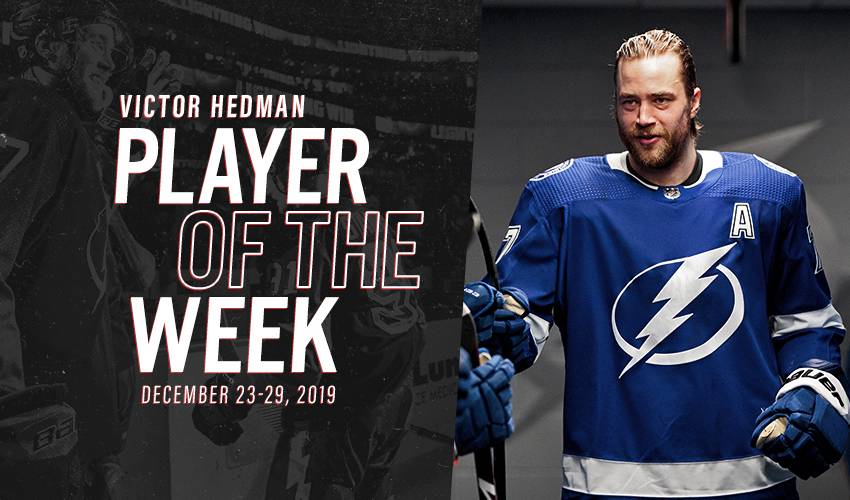 The 29-year-old now leads the Tampa Bay Lightning in assists (28) and sits three points back of Nikita Kucherov for the team lead in points. Hedman’s recent surge also moved him into third in scoring among defenceman (37), behind Roman Josi (39) and John Carlson (50).

His efforts for the week put him on pace for a career-year while also helping the Lightning pick up three straight wins to get back into the Atlantic Division race. The 2018 Norris Trophy winner continued his strong month of December, scoring 15 points (5 goals, 10 assists) in 13 games.

The second overall pick from the 2009 NHL Draft was also recognized in the NHL’s Decade in Review as the only Lightning defenceman to win a Norris Trophy and for being the franchise leader in goals, assists and points by a defenceman.

Victor Hedman (450 points) is the highest-scoring defenseman from the 2009 #NHLDraft and ranks fourth overall in points from his class behind John Tavares, Matt Duchene and Ryan O’Reilly.#NHLStats Decade in Review: https://t.co/lH3jsr0zSW pic.twitter.com/Otzifl4v0j

Hedman scored two goals and added an assist Monday to help the Lightning win 6-1 over the Florida Panthers at Amalie Arena.

In the first of six straight games against an Atlantic Division opponent, Hedman put Tampa Bay ahead 2-0 with his eighth goal of the season on a rocket shot from the point.

After registering his second point of the game with an assist on Alex Killorn’s power-play goal, Hedman added his second goal of the game and ninth of the season to give the Lightning a commanding 6-1 lead.

"We love these kinds of games, they are important games for the team, and we like to be in these situations," Hedman told reporters postgame. "We have to rise to the occasion. We did that today, and we have to do that in the upcoming games as well."

Hedman registered a career-high four assists Saturday as the Lightning beat the Montreal Canadiens 5-4 for their second straight win at Amalie Arena.

Hedman’s first assist of the game was a notable one as he assisted on Steven Stamkos’ 14th goal of the season and his 800th career point.

Congrats to @RealStamkos91, who in his 779th NHL game Saturday, put up his 800th NHL point! pic.twitter.com/7UmHbhtlZs

With the game tied at two, Hedman’s breakout pass would take a fortunate deflection off a Canadiens player and onto the stick of Mitchell Stephens, who would drive to the net to score his first career NHL goal.

The Lightning defenceman would add two more assists to tie a franchise record for helpers in a game, becoming just the fourth defenceman in franchise history to do so.

While the Lightning got off to a less than ideal start falling behind 2-0 before registering their first shot on goal, Hedman credited his team for pushing forward and getting two crucial points that helped Tampa Bay move past Montreal in the standings.

“There was 50 minutes left in the game (after falling behind 2-0), so there was a whole lot of hockey left,’’ Hedman said to reporters after the game. “It’s not fun to go down like that, but it’s going to happen sometimes, and it’s how you respond as a group.’’

Hedman extended his point streak to three games Sunday as the Lightning earned their third straight game with a 2-1 victory over the Detroit Red Wings at Amalie Arena.

With the game tied in the third period and Tampa Bay on the powerplay, Hedman  assisted on Brayden Point’s goal which would eventually be the game-winner. The assist on the man-advantage also helped Hedman add to his NHL lead in power-play points among defencemen (19).

Hedman will look to extend his point streak when the Lightning end 2019 against the Buffalo Sabres Dec. 31, followed by a three-game road trip to start the New Year, beginning with the Montreal Canadiens Jan. 2, before back-to-back games against the Ottawa Senators Jan. 4 and the Carolina Hurricanes Jan.5.