Player of the Week | Max Pacioretty

Max Pacioretty led NHL scoring for the week with eight points in four games, including back-to-back multi-point performances along a four-game goal streak. 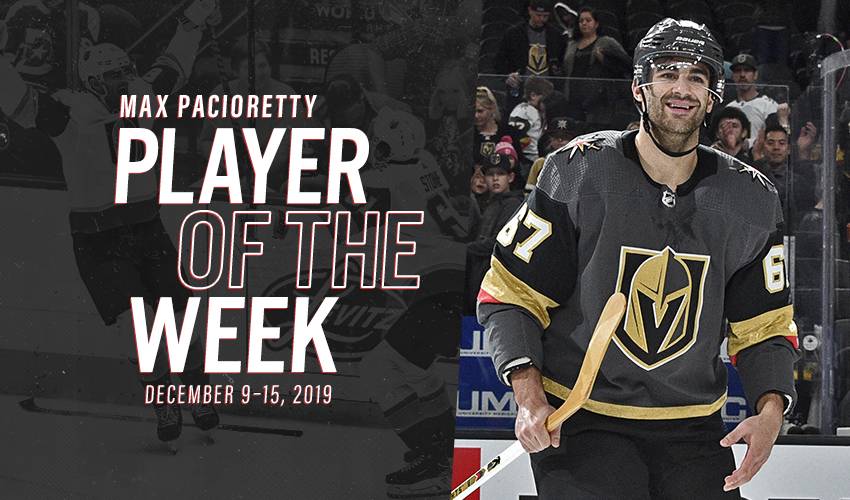 Max Pacioretty led NHL scoring for the week with eight points in four games (5-3–8), including back-to-back multi-point performances along a four-game goal streak.

The 31-year-old now leads the Vegas Golden Knights in goals (15), assists (19) and points (34) this season after ending recording a season-high, four-point game Sunday. His efforts for the week, which included an overtime game-winning goal, also helped Vegas pick up three wins in their last four games to move into second place in the Pacific Division and sit just one point behind the Arizona Coyotes.

On pace for a career-year, Pacioretty credits his linemates for the success he is having in a productive start to his second season with the Golden Knights.

"I think I’ve gotten my opportunities pretty much the entire year," said Pacioretty. "I’m obviously playing on a really good line with two really good players and getting a ton of opportunities. That’s kind of my job is to make sure that I finish those opportunities."

Pacioretty scored a goal Tuesday to help the Golden Knights win 5-1 over the Chicago Blackhawks at T-Mobile Arena.

With Vegas leading 3-0 in the third period, Pacioretty helped put the game out of reach by finishing off a two-on-one with linemate Mark Stone for his 11th goal of the season.\

It was an emotional return to action for teammate Marc-Andre Fleury, who was playing in his first game since the passing of his father. Fleury made 28 saves while picking up his 451st career win, only three wins behind Curtis Joseph for sixth on the all-time NHL wins list.

Unbelievable ovation for Marc-Andre Fleury, who is starting his first game since the passing of his father. #VegasBorn pic.twitter.com/UKuFeugQlH

Pacioretty scored for the second-straight game Thursday in the Golden Knights’ 4-2 loss to the St. Louis Blues at Enterprise Center.

Pacioretty tied the game after the Blues scored the opening goal by putting away his own rebound on a breakaway for his 12th goal of the season. Pacioretty was also playing in his 100th game with Vegas since being acquired from the Montreal Canadiens in 2018.

Pacioretty extended his goal streak to three games by scoring the overtime game-winner to lead the Golden Knights to a 3-2 win over the Dallas Stars Friday at American Airlines Center.

Shea Theodore set up Pacioretty with a perfect pass in the extra period to send him in on a partial breakaway, eventually beating Stars netminder Ben Bishop with a nice backhander for his 13th goal of the season.

Earlier in the middle frame, Pacioretty also assisted on Chandler Stephenson’s goal that put Vegas ahead 2-1 before Stars captain Jamie Benn tied the game in the third period. However, Pacioretty said the team was determined to avoid another loss.

"It definitely feels good," Pacioretty said after the game. "We saw the difference tonight of when we play the right way and the wrong way. It started there in the second period. We really found our game, and you can see the difference when we're playing as a unit of five and making sure that we make life hard on their forwards at the blue line.

"We felt that we deserved to come out with a win, and luckily we were able to."

Pacioretty extended his goal streak to four games by scoring two goals and adding two assists in the Golden Knights’ 6-3 win over the Vancouver Canucks Sunday at T-Mobile Arena.

With the game tied at 1-1 in the first period and Vegas on the power play, Valentin Zykov scored his first goal of the season by putting home the rebound on Pacioretty’s initial shot.

Pacioretty made it 5-2 with his 14th goal of the season by getting behind the Canucks defence and beating Jacob Markstrom with a backhander.

He then added to his team lead in goals with his 15th of the season on a perfectly placed wrist shot with less than a minute left in the game.

Pacioretty continues to enjoy a fair amount of success against the Canucks, having scored 10 even strength goals and 23 points in his last 17 games against Vancouver.

Pacioretty will look to extend his goal streak when Vegas hosts the Minnesota Wild Dec. 17. The club then hits the road to take on the Canucks Dec.19 before wrapping up their week in San Jose with a tilt against the Sharks Dec. 22.

Pacioretty & Habs Won’t Pack It In

Player of the Week - Max Pacioretty

Thanks to his play, his leadership and his community involvement, Max Pacioretty is the NHLPA.com Player of the Week!

Max Pacioretty - Player of the Week

Max Pacioretty has returned from injury earlier this season to recently be one of the Habs' best players, leading them up the Eastern Conference standings.