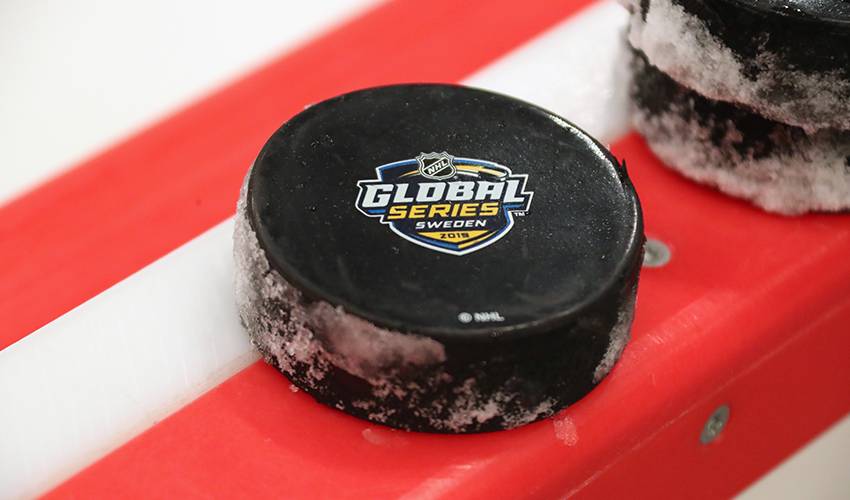 As the Tampa Bay Lightning and Buffalo Sabres prepare to drop the puck on their two-game NHL Global Series in Stockholm, Shattenkirk, in his first season with the Bolts after signing as a free agent with the club in August, is thoroughly enjoying his Swedish experience.

“So far I would say the best part of the trip for me has been hanging out with the team,” Shattenkirk told NHLPA.com. “Being on the road, it’s allowed me to go to dinners and explore the city a bit with my teammates.”

The 30-year-old defenceman has made a big impression on his new team, scoring four goals and recording 10 points in 13 games.

Shattenkirk, the 14th overall selection of the Colorado Avalanche in 2007, is looking to keep his impressive start going on European ice.

While the focus is on picking up a pair of wins in Sweden, the opportunity to explore the picturesque Swedish capital and surrounding areas has been a pleasant diversion ahead of the November 8 and 9 games.

His favourite place so far is the Vasa Museum, located in the royal parkland, Djurgarden, in Stockholm.

One of Scandinavia's most visited museums, Vasa showcases the unique and carefully preserved warship of the same name from 1628, which is embellished with hundreds of wooden sculptures.

We got the chance to tour @thevasamuseum this afternoon after practice with @tjohnny09 and @yannigourde – an absolutely incredible exhibit and learning experience.

Every year, around 1.5 million people walk through the doors of the museum, which details the warship Vasa's history and life at the time and how after 333 years at the bottom of Stockholm Bay, the ship was rediscovered and salvaged.

“It was really amazing to see an old warship from the 17th century so intact,” said Shattenkirk. “It gave a great glimpse into the history of the country.”

Sights and sounds aside, the veteran of nearly 650 regular season NHL games is looking forward to playing at Ericsson Globe, one of Sweden’s most impressive sporting venues. The building seats around 14,000 for hockey and also showcases a tram on the outside that takes people to the top of the sphere to get a one-of-a-kind opportunity to see a panoramic view of Stockholm.

The Globe has played host to Swedish National Team games and Djurgardens of the Swedish Hockey League.

The Lightning-Sabres matchup is the sixth set of NHL games to be contested at the Globe, which got out of the gates in 2008 with a season-opening series between Pittsburgh and Ottawa. Other two-game contests came in 2009 (St. Louis-Detroit), 2010 (San Jose-Columbus) and 2017 (Ottawa-Colorado). In 2011, the New York Rangers launched their campaign against Anaheim and Los Angeles.

The two games between Buffalo and Tampa Bay will mark the 12th and 13th NHL regular-season games played in Sweden, and the 11th and 12th games played at Ericsson Globe in Stockholm.

Shattenkirk, who made an immediate impact with his new team, starting the 2019-20 season with three goals and an assist in Tampa Bay’s first four games, was named the Lightning’s Best Player of the Month for October.

Happy in his new surroundings, the two-game set in the land of Tre Kronor is making the latest chapter in his NHL career that much more enjoyable.

“Being here in Sweden, it definitely helps me become more comfortable with the group.”

Zemgus Girgensons has been making the most of his time in Stockholm, thanks to some helpful tips from a Swedish teammate.

The 25-year-old Latvian, just 15 games short of 450 for his NHL career, has been using his off-ice time to test out some of the local places of interest and restaurants during Buffalo’s Global Series experience.

On Monday and Tuesday, Girgensons and his teammates enjoyed the opportunity to take in the Swedish capital’s ample cultural and cuisine scenes.

Marcus Johannson, one of the Sabres’ alternate captains, played his part as unofficial tour guide, and provided the team with a spreadsheet of interesting spots to visit. It's a gesture that has gone over well with the players.

The 29-year-old Johansson, who was born in Landskrona, Sweden, has earned five-star reviews for his recommendations.

“I tried couple of those spots,” offered Girgensons. “Good advice. There is some great food over here.”

But it’s not just the gastronomy that has the centre dishing out the love for Sweden.

“The coolest part is just being here and exploring a new area with European fans,” said Girgensons. “The city itself is awesome and doesn’t get boring.”

When the puck drops on the two-game set featuring Buffalo and Tampa Bay, Girgensons and other Sabres players can expect to see some familiar faces in the stands at Ericsson Globe Arena on November 8 and 9.

The 14th overall selection of the Sabres in 2012 is looking forward to having his own cheering section.

“A lot of European guys including myself have family coming over,” noted Girgensons. “It’s a special time to play hockey.”