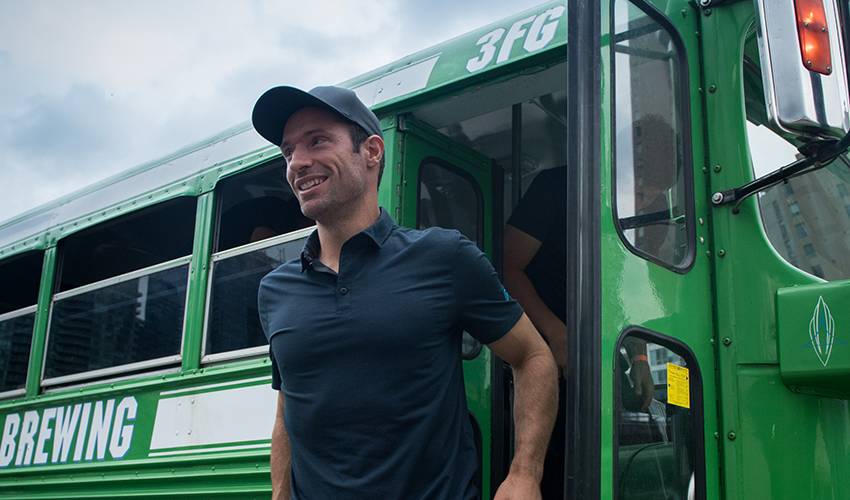 Eight years. Two charities. One-of-a-kind. Smashfest, the charity ping-pong event created by Dominic Moore in 2012, with the help of the NHLPA, is on the cusp of a very impressive milestone.

On July 25, over current and former NHLPA members will gather at Steam Whistle Brewing in Toronto to help raise funds for concussion and rare cancer research.

The event, one that sees players mix and mingle with fans, while showing off their ping-pong skills, continues to bring out some of hockey’s top stars. Past participants include Logan Couture, Phil Kessel, Mitch Marner, Tyler Seguin, Jeff Skinner, Steven Stamkos, Doug Gilmour, Eric Lindros, and many others.

The fourpeat champ @Patrick_Eaves explains how ping-pong 🏓helped him recover from concussion symptoms early on in his NHL career. #SmashfestVIII pic.twitter.com/6mDZvmhe1T

A veteran of 897 regular-season NHL games, Moore could easily offer up dozens of reasons as to what’s made Smashfest such a smash hit.

In the past seven years, more than $865,000 has been directed to the two important causes.

That total could reach the seven-figure mark after Thursday night.

Moore’s efforts have also meant a great deal to the programs Smashfest champions.

Smashfest has helped aid research into rare cancers through the Broad Institute of MIT and Harvard and concussion treatment through the Steve Moore Foundation with the Robarts Research Institute at the Schulich School of Medicine and Dentistry at Western University.

The damage doesn't end with the hit.

Dr. Arthur Brown teamed up with @_Smashfest in 2018 to create a study that continues the important work of preventing long-term concussion consequences. #SmashfestVIII pic.twitter.com/ORQXgeB61v

“Everyone has causes that mean something to them,” offered Moore. “These are ones that we have supported from the very beginning. We’re very proud of what the money is going towards. We feel very fortunate to have the research partners that we have. We wanted to find to ways to spend the money where we get a huge bang for our buck. That’s something I’m just as proud of, in terms of the event and what that’s become, but also the impact and what that’s developed into.”

Players around the league are happy to lend a helping hand to Moore.

"Last year was my first year,” Brandon Tanev told NHLPA.com. “I thought it was an amazing event. Dom does a terrific job in setting things up, and it's for such great causes. Any time you can participate and help raise money and awareness for something like this, it's awesome.

"To see the turnout he gets year after year at a great venue, and having everything so organized – it's fantastic. It's such a great way for the players to interact with the fans."

Skinner, who has attended all but one edition of Smashfest, is back again to support Moore.

The Buffalo Sabres forward, coming off a career season, appreciates the uniqueness of the event.

“It’s very unique in the way you are able to connect with the fans,” said Skinner. “The people that come really seem to enjoy it, and it gives the players a chance to talk with fans throughout the night. If it’s a golf tournament, it’s usually with your foursome. With this, it’s a setting where you get to mingle with fans. That makes it a lot of fun.”

Even more so for a player whose golf skills are admittedly below par.

🏓 He just keeps coming back, and we're so happy to have him! Announcing @JeffSkinner as our second #SmashfestVIII player! pic.twitter.com/Qsza9hTvZS

Moore, who tabbed Alexander Kerfoot as a dark horse to win the title this year, is appreciative of the players’ contributions over the years.

“The event is unique just as the players are unique,” said the 95th overall selection of the New York Rangers in 2000. “Part of the event’s appeal is that it’s showcasing the players’ personalities in a fun and novel way. I think that’s why it’s been so well received. I think the players are excited and eager to embrace those kinds of opportunities.

“They’re tremendous supporters of the community. You see players doing lots of community events throughout the year and in the summer. For Smashfest, when we get guys eagerly volunteering to be part of it, that means a lot.”

Eight years in, there’s no thought of putting the paddle down for Smashfest.

“It’s grown to what it is and we still think it has more potential,” said Moore. “We’re motivated to continue to grow it, spread the good message and raise money for the causes.”