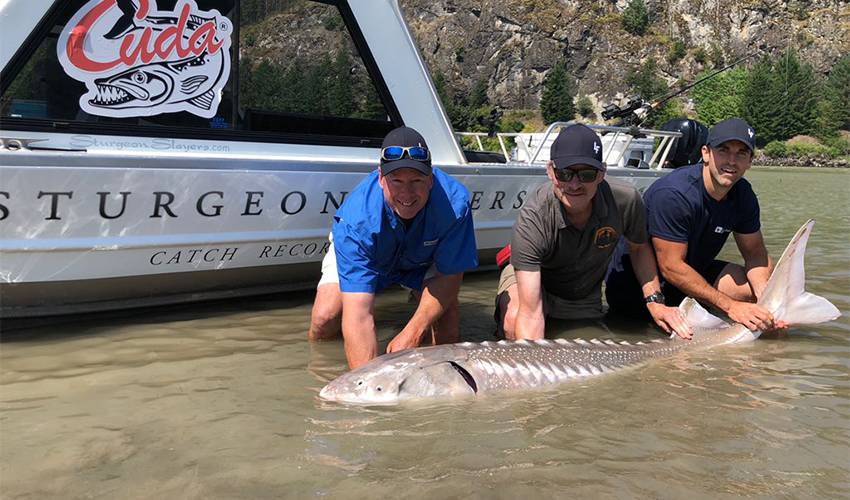 The only question mark? Seeing if he can convince a former teammate to get up close and personal with a sturgeon.

If past history is any indication, this year’s edition of the Ladd Foundation Sturgeon Fishing Event will be a big hit for participants and the recipients of the monies raised.

Our 3rd annual Ladd Foundation Sturgeon Fishing Event is just around the corner, July 30-Aug 2. Email brandy@laddfoundation.org if you want to catch a dino! pic.twitter.com/b4yDVnnFIH

Ladd, coming off his 14th NHL season, will be joined by several NHLPA members in British Columbia July 30-August 2. The proceeds from the event will go to the Canadian Mental Health Association Kelowna and the Fraser River Sturgeon Conservation Society.

Ladd’s only real challenge with his fellow players will be in convincing Wheeler, his former Winnipeg Jets teammate, to get over a certain phobia.

“All I know is that Wheels is scared to death to touch a fish,” said Ladd of the Jets captain. “I think that’s what I’m looking forward to the most. Maybe I can get some video of him freaking out.”

Don’t count on it, said Wheeler.

Who is likely to win that wager?

“Me,” said Wheeler with a laugh. “I won’t touch those things.”

Whether Ladd gets his wish or not, he’s looking forward to hitting the water in less than a month.

“Every year, it’s gets a little easier in terms of how to organize the event,” said the veteran of 946 regular season NHL games who formed the Ladd Foundation with his wife, Brandy. “My wife has done a great job in organizing it and what we need to do to grow it and stay ahead of the curve. I feel we’re really hitting our stride, getting the little things dialed-in, how we can make it better for everyone that’s coming and raise a lot of money for two great charities.”

Both causes have special meaning to the Ladds.

“The first one, the conservation society, is run by a really great guy we do the tournament with,” noted Ladd. “His name is Kevin Estrada and he runs Sturgeon Slayers. I’m sure people have seen pictures of the sturgeon that we’ve posted. We played together in Lowell my first year in the American Hockey League. We were roommates for a couple months. He’s the one who took me out fishing for sturgeon and it was amazing.”

Always nice to see #conservationsts get rewarded. These 2 gentlemen have returned for their personal best 8’2 🙌 #SturgeonSlayers #CatchRecordRelease #Conservation #Sustainable pic.twitter.com/uP0dN2ML6J

Estrada’s commitment to sturgeon conservation has given Ladd an even stronger appreciation for his home province.

“Growing up in B.C., I think we take for granted what we have here in terms of the outdoors and the spectacular landscapes. When you move away, you realize it’s something we need take care of so that our kids and their kids have the chance to enjoy what we did.”

Highlighting the significance of the Canadian Mental Health Association Kelowna’s work is equally important to Ladd.

“Kelowna is where we reside in the summers now. We want to help by supporting the community here. When you work with organizations that deal with mental health issues, you realize how much it affects so many people from all walks of life. From dealing it with family and friends and teammates, to seeing what Robin [2019 Bill Masterton Trophy recipient and former Islanders teammate, Lehner] went through and how he handled it… those are the things that really got us motivated to make that a part of the event.”

Organizing and hosting the event is a huge undertaking, admitted Ladd. It’s why he’s only too happy to let Brandy wear the ‘C’, so to speak.

“Brandy handles pretty much everything and does a great job of doing that. I couldn’t do that without her. I actually did it myself the first year and it went much smoother when she took over in the second year. Kevin and Mariko Izumi – she handles all the social media – do a fantastic job too.”

The fourth overall pick of Carolina in 2004 is also grateful for the players who lend their support each year.

“With the guys, it’s the time of the year when they get to spend time with their families. This is their time to get away from the game and relax, so for them to take time out of their busy summer and come help me out, it shows the type of character and type of people we have in our league.”

For more on the event, visit laddfoundation.org!

From what most people don't know about Pat's son to what surprises her most about him – get to know Winnipeg Jets' captain Blake Wheeler through the eyes of his mom!