Brayden Schenn came up big for the Blues in Game 4 of the Stanley Cup Final, scoring once and adding an assist in a 4-2 St. Louis win on home ice. 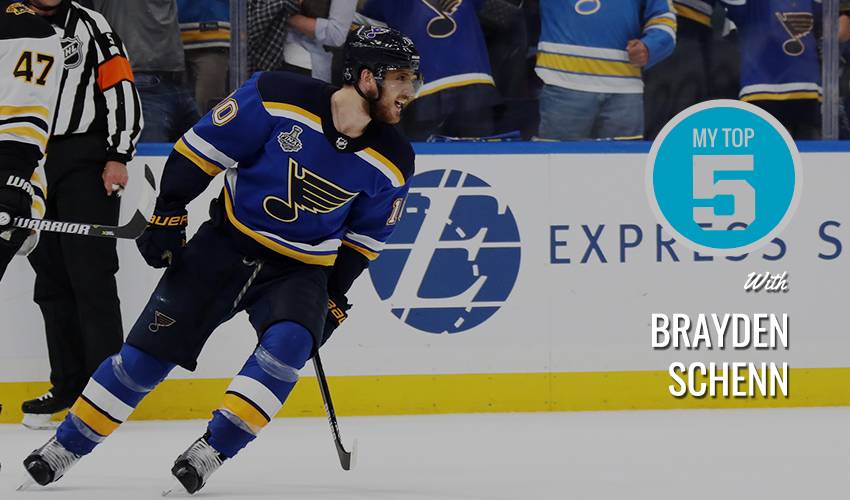 Brayden Schenn came up big for the Blues in Game 4 of the Stanley Cup Final, scoring once and adding an assist in a 4-2 St. Louis win on home ice.

Schenn, whose brother Luke has played in 734 NHL games, has also been a massive hit in the hits department this postseason, racking up 72 checks (tied for fourth). He’s also fashioning a 51 percent strike rate in the faceoff dot.

Ten years ago, Schenn was the recipient of the H.L. "Krug" Crawford Memorial Medal for athletic achievement in western Manitoba. He also struck gold with Canada at 2008 Under-18 World Championship and the 2008 Ivan Hlinka Memorial Cup.

Schenn has three NHL career hat tricks, including one with St. Louis. His first two came as a member of the Philadelphia Flyers with the very first one coming against the Calgary Flames on February 29, 2016, and the second the next season on December 10, 2016 against the Dallas Stars. His most recent came December 5, 2017, when he lit the lamp three times in a 4-3 road win against Montreal.

Schenn completed his first Western Hockey League (WHL) season, 2007-08, as the Brandon Wheat Kings leading scorer and top rookie scorer in the WHL, recording 28 goals and 43 assists for 71 points. He received the Jim Piggott Memorial Trophy as WHL Rookie of the Year, and earned a spot on the Canadian Hockey League All-Rookie Team. He was also honoured with the Wheat Kings team awards for Rookie of the Year and Most Popular Player.

At the 2011 World Junior Championships, Schenn tallied 18 points, tying Canada's all-time record for a single tournament, originally set by Dale McCourt in 1977. At the conclusion of the event, Schenn, who won a silver medal, was the tournament's top scorer, and was named to the media All-Star team. The International Ice Hockey Federation Directorate named him Best Forward and Tournament MVP.

Schenn has the same birthday as TV personality James Corden, actress Kristen Wiig and actor Ty Burrell. The No. 1 U.S. Billboard song on Schenn’s birthday, August 22, 1991, was Bryan Adams’ hit “(Everything I Do) I Do It for You.”