When the highly touted kid from Switzerland completed his rookie Canadian Hockey League season, no one in the Halifax Mooseheads organization second-guessed the decision to draft him. 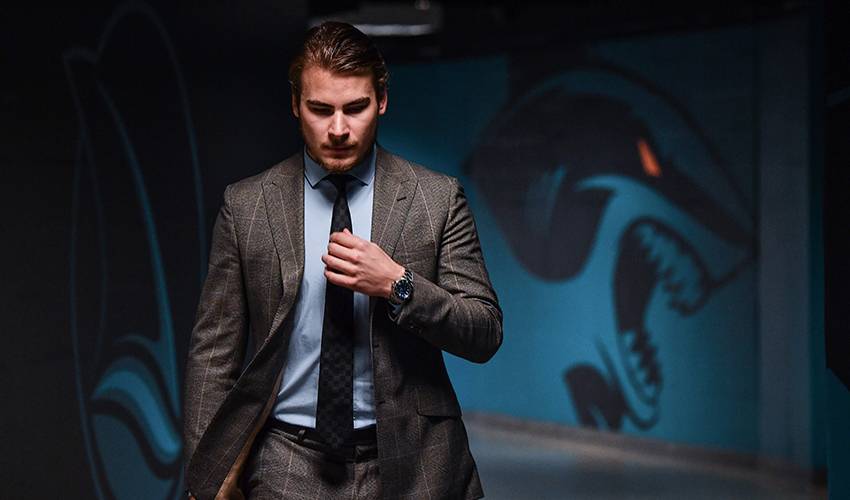 When the highly touted kid from Switzerland completed his rookie Canadian Hockey League season, no one in the Halifax Mooseheads organization second-guessed the decision to draft him. They knew what was coming.

Selected 12th overall in the 2013 CHL Import Draft by the Mooseheads, Timo Meier joined the club to start the 2013-14 QMJHL season.

Based on hours of scouting, eye-catching stats and undeniable skill, the team had lofty expectations for the Swiss forward.

In 66 games in his rookie campaign, Meier scored 17 times and recorded 34 points. In 12 post-season contests, he chipped in offensively with one goal and three assists.

“He came in here the same year as (current Winnipeg Jets star) Nikolaj Ehlers,” recalled Mooseheads GM Cam Russell. “We had traded for both European picks, which were No. 6 (Ehlers) and No. 12 (Meier). We drafted both of them and Nik came in and lit it up. He scored 49 goals and Timo had 17. And the funny thing was, I can still remember (Halifax majority owner and president) Bobby Smith telling me, ‘Timo is half a step away from getting two points every game.’”

When the next season rolled around, Meier was one step ahead.

“Boy, did you ever see it,” said Russell. “He was dynamite.”

After 23 games and 36 points the following season, Meier was dealt to Rouyn-Noranda, where he posted 23 goals and 51 points in 29 games.

“Unbelievable teammate to have, class act in the community and a great all around person,” praised Russell of the 2014-15 Mike Bossy Trophy recipient as the top pro prospect in the QMJHL.

Meier, selected ninth overall by San Jose in the 2015 NHL Draft, also happens to be one heck of a hockey player.

When the hockey world talks about the Sharks' run to the Western Conference Final, the 22-year-old winger’s name is understandably a big part of the discussion.

“He’s such a power-forward,” raved Russell. “He’s so strong on the puck. He’s one of those guys that if he has the puck, you’re going to have work very hard to get it from him.”

What else does Russell like what he’s seeing from Meier these days?

“The same thing that we saw when he was here. He was just a determined player. He plays a passionate, hungry game and plays with enthusiasm. I think the guys that have played with him know that. He plays the same way every single game. It’s just a passion you can’t teach.”

Seeing Meier excel on the NHL stage is a source of great pride for Russell and co.

“You never really know what players are going to make that step to the next level, but it doesn’t surprise me,” offered Russell. “We’re all pretty excited for him.”