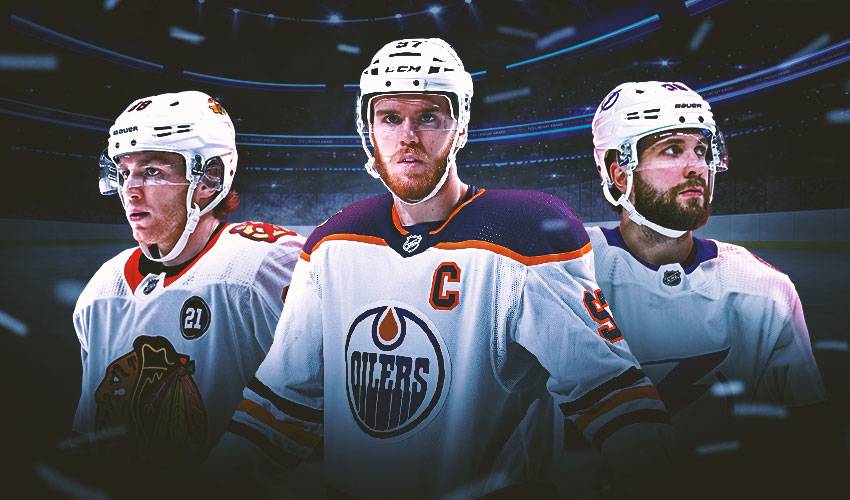 TORONTO (April 25, 2019) – The National Hockey League Players’ Association (NHLPA) announced today the three finalists for the 2018-19 Ted Lindsay Award (TLA) are forwards Patrick Kane of the Chicago Blackhawks, Nikita Kucherov of the Tampa Bay Lightning and Connor McDavid of the Edmonton Oilers. The TLA is presented annually “to the most outstanding player in the NHL,” as voted by fellow members of the NHLPA.

Kucherov is a first-time TLA finalist – the sixth consecutive season a finalist has held that distinction. Meanwhile, McDavid has been named as a finalist for a third-straight season after becoming the first player to be voted most outstanding by his peers twice (2016-17, 2017-18) before the age of 22. Kane is seeking his second TLA (2015-16) in four seasons after becoming the only U.S.-born player to receive the award.

The 2018-19 TLA recipient will be announced Wednesday, June 19 during the 2019 NHL Awards presented by Bridgestone. Formerly known as the Lester B. Pearson Award, the TLA will be presented less than four months after the passing of its namesake and NHLPA pioneer, Ted Lindsay.

The three TLA finalists who received the most votes from their fellow players based on their 2018-19 regular-season campaigns, listed in alphabetical order, are: 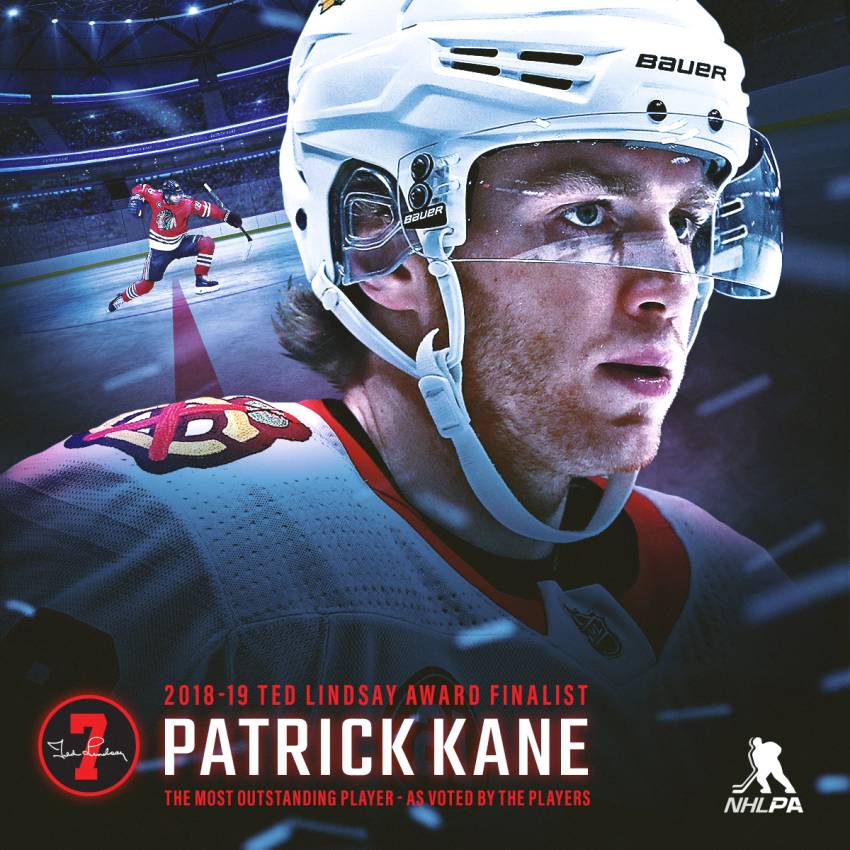 Kane (United States) played in 81 regular-season games for the Chicago Blackhawks as he led his team in goals (44), assists (66) and points (110) to set career highs in the latter two categories. The native of Buffalo, New York, matched Kucherov for the second-most even-strength points (80) in the league, and he placed third in NHL scoring and points per game (1.36) – trailing only the other two TLA finalists – while his personal-best average ice time (22:29) ranked third among league forwards. Kane’s 2018-19 campaign marked the second time the forward eclipsed each of the 40-goal, 60-assist and 100-point marks in a single season, having previously done so in 2015-16 when he received the Ted Lindsay Award. Kane is the only player in Blackhawks franchise history to ever receive the TLA, and he is seeking to become only the 10th recipient at 30 years of age or older in the award’s 48-season history. 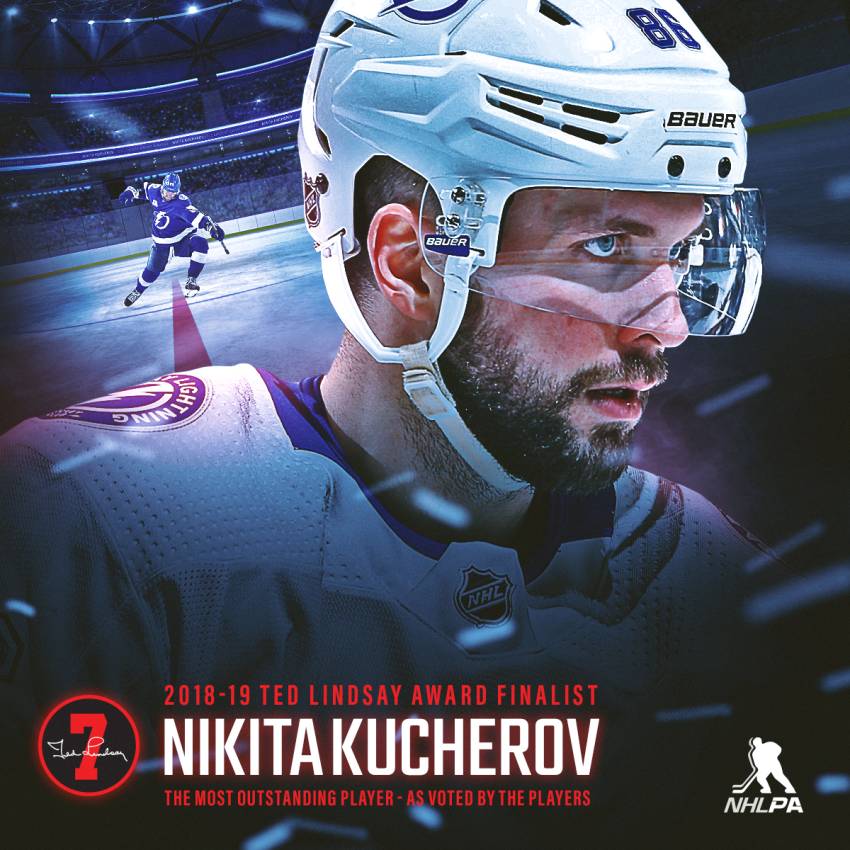 Kucherov (Russia) played in all 82 regular-season games to help the Presidents’ Trophy-winning Tampa Bay Lightning tie a league-best record of 62 wins, while capturing his first Art Ross Trophy. The 25-year-old from Maykop scored a career-high 128 points to set a new single-season scoring record for the most by a Russian-born player, besting Alexander Mogilny’s 127 points from 1992-93. Kucherov led the league in multi-point games (38), points per game (1.56) and power-play points (48). His 87 assists also led the league and, in addition to establishing a personal best, tied the single-season record for the most by a winger (Jaromir Jagr, 1995-96). The right-winger’s 41 goals were good for a share of second-most on his team and sixth in the league, while his even-strength points (80) placed him in a tie with Kane for second in the NHL. A first-time TLA finalist, Kucherov looks to become the first Lightning player to receive the award since Martin St. Louis (2003-04). 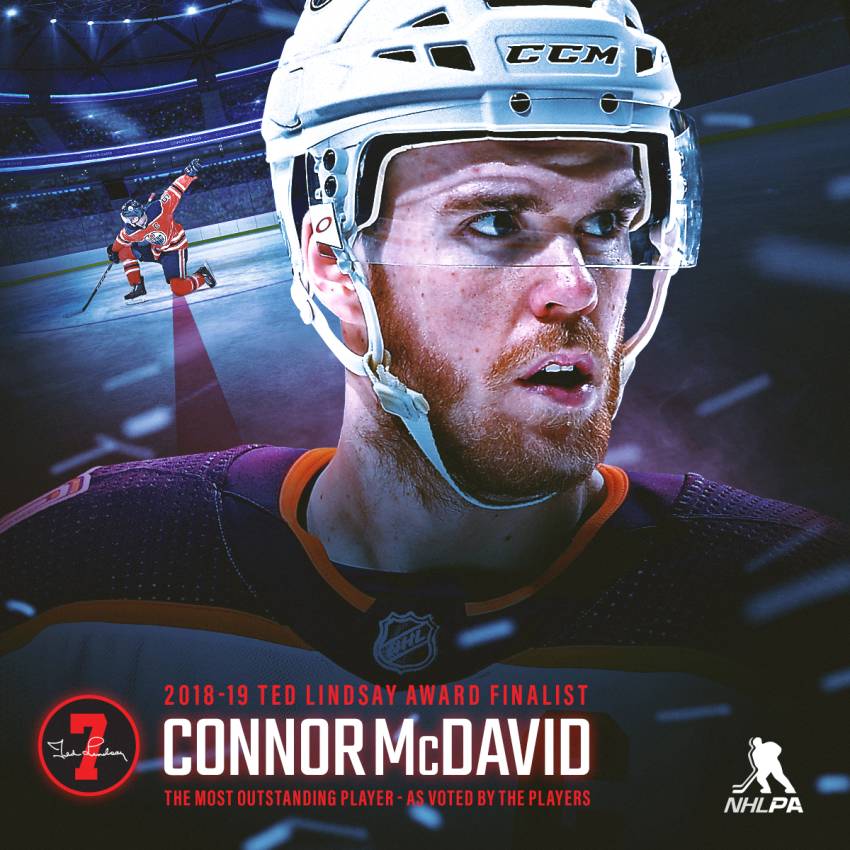 McDavid (Canada) played in 78 regular-season games for the Edmonton Oilers as he led his team in scoring (116 points) to establish a personal best in the category. The centre from Richmond Hill, Ontario, paced all NHL scorers in even-strength points (81) – one more than the two other TLA finalists. He matched his goal total (41) from last season to earn a share of sixth place in the NHL, while his 75 assists ranked second in the league and set a new career-high mark. McDavid led all NHL forwards in average ice time (22:50), tied for second overall in game-winning goals (9) and placed third in takeaways (99). He also ranked second in the league in points, points per game (1.49) and multi-point games (36). McDavid looks to become the first three-time recipient before the age of 23, and the first player to be deemed most outstanding by his peers in three consecutive seasons since Alexander Ovechkin (2007-08, 2008-09, 2009-10). 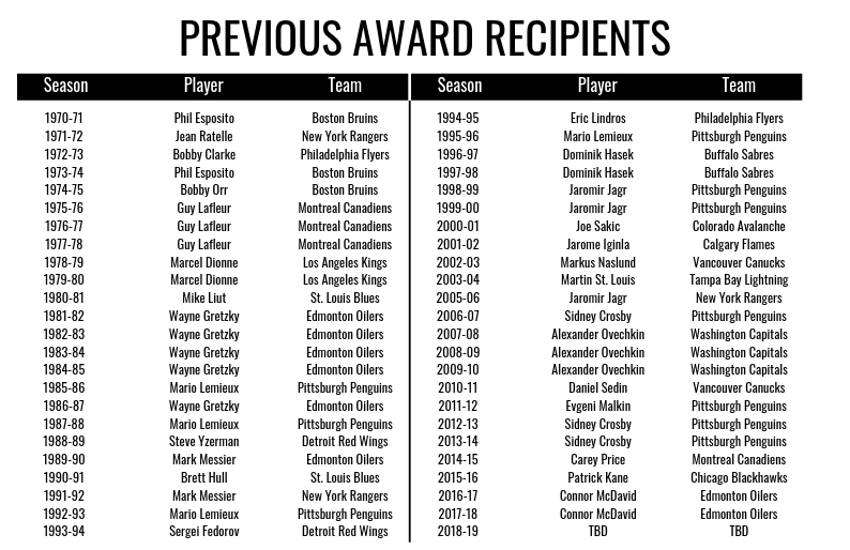 The Ted Lindsay Award (TLA) is unique as the only award voted on by the players themselves, carrying on the tradition established with the Lester B. Pearson Award in 1970-71. NHLPA members annually vote on the player they deem to be the most outstanding in the NHL regular season. Reintroduced in 2009-10, the TLA honours the legacy of its namesake – the late Ted Lindsay – an NHL All-Star forward known for his skill, tenacity, leadership and role in establishing the original Players’ Association. Join the conversation by using #TedLindsayAward.­­­­­­