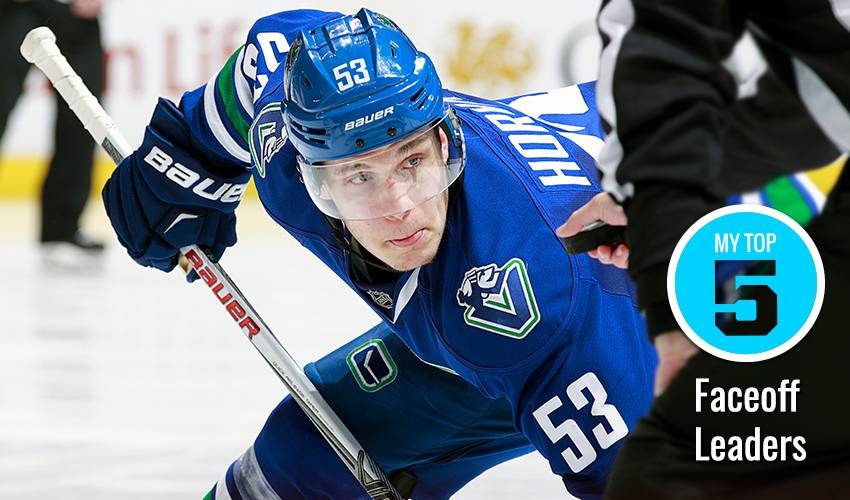 Bo knows faceoffs. The talented Vancouver forward is an offensive star, posting nine goals and 16 points in 19 games to date. He’s also proficient at getting the puck to his teammates, having racked up 258 faceoff wins, to go along with a 54.3 win percentage.

Selected by the Pittsburgh Penguins second overall 12 years ago, Staal, now patrolling centre for the Carolina Hurricanes, is 39 games shy of 900 for his NHL career. Aside from his faceoff prowess, he’s also chipped in with five goals and eight points for the ‘Canes.

He delivers offensively, having registered 25 points in 17 games, is one of the game’s best two-way players and is a highly respected leader. Did we also mention he’s pretty good at winning faceoffs? The 33-year-old Quebec native, who is only 20 games away for 1,000 in his NHL career, is boasting a 56.9 per cent win rate in the faceoff circle.

Chicago’s captain, who recently surpassed the 800-game mark, is doing a bit of everything this season, including his nine goals and 14 assists in 18 games. In 364 faceoff opportunities, he’s won 209 of them, for a 57.4 per cent win average.

His St. Louis teammates certainly aren’t singing the Blues, as the outstanding forward has shown up big-time on the scoresheet with eight goals and 21 points in 15 games. The 27-year-old is also making an impact in the dot, winning 63.0 per cent of the draws.