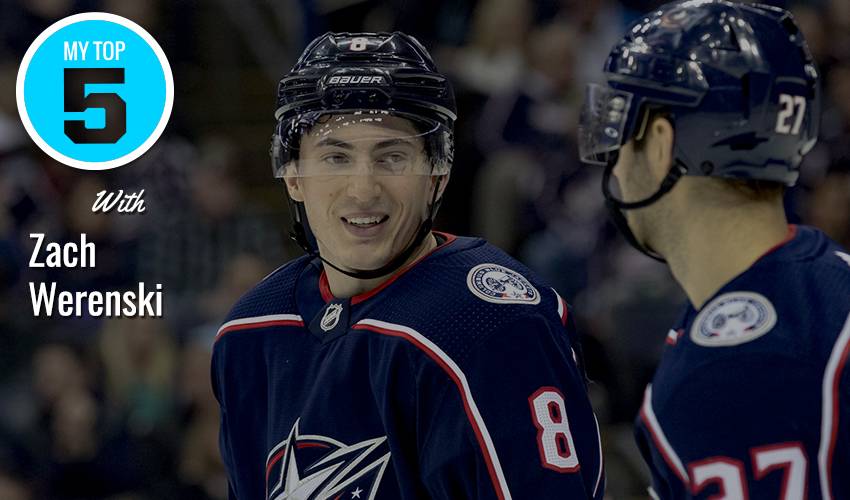 From his solo vocal sing-alongs in the car, to what teammate he’d choose to go one-on-one against in a lip sync battle, the 21-year-old Michigan native delivers his favourite tracks from Toronto's own Drake.

“I guess it dates back to my high school years when I first started listening to Drake. I liked the music right from the start and it’s carried through until today. Everyone was listening to him in the hockey locker rooms and his music seemed to be on all the time.”

“I saw a few of his concerts over the years. I’m just a really big fan of him and his music. He changes it up from rap to a little bit of singing, slowing it down and then picking it up. I think he’s so versatile. He’s definitely great live.”

3. Carpool karaoke for one

Does Werenski have the same smooth vocal talents as Drake? “I’m close. Well, I like to think I’m close. That is until someone else gets in the car and then they tell me how bad I am. I definitely do sing along to a lot of his songs.”

“I’d like to go up against Pierre-Luc Dubois in a Drake lip sync battle. I think that would be a good one. He always thinks he has good dance moves and I think he knows music, so that would be pretty funny.”

“It really is tough to choose just five, but these would be my favourite Drake songs, in no particular order: Underground Kings, The Language, Over, Forever, Up All Night.”

Werenski grateful to line up beside Jones

What’s the best thing about playing alongside Seth Jones? For a fellow defenceman, it’s in knowing you don’t have to face-off against him.