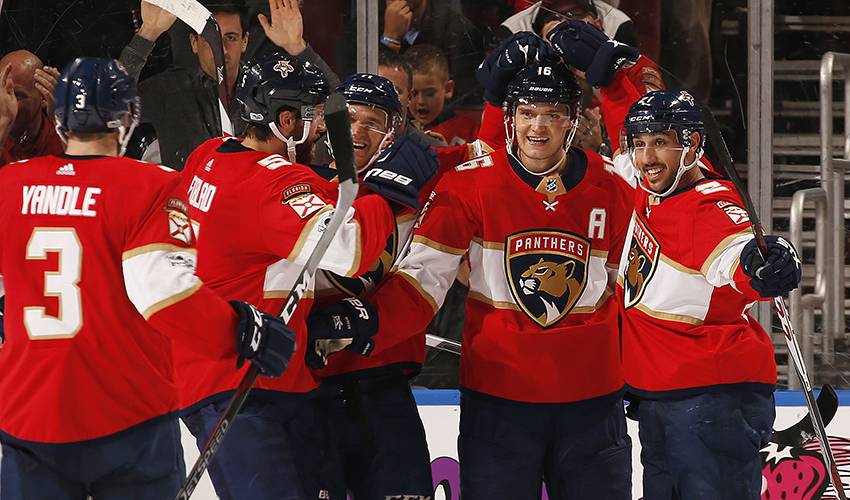 Just how good is Aleksander (Sasha) Barkov, Florida’s star centreman? His teammate, veteran defenceman Keith Yandle, is happy to offer up his take.

“I think Sasha’s skill set is some of the best in the world,” said Yandle of the Finnish-born forward who in 2013 became the youngest player since the 1967 NHL expansion to score a goal, at 18 years and 31 days. “His attention to detail in all three zones is amazing. For such a high-end skill guy, you will never see him cheat to go on the offence.”

Selected second overall by the Panthers in 2013, Barkov, now in his fifth NHL season, is on pace to establish several personal-best offensive numbers, including topping the 59 points he tallied in 2015-16.

The 22-year-old son of former Russian hockey player Aleksander Barkov, Sr. has established himself as a genuine major league talent, showcasing poise, playmaking ability and a penchant for putting the puck in the net.

In his last four games, Barkov has recorded three goals and seven points, including a three-point night on January 9 against St. Louis, a 7-4 road win for the Panthers. He earned First Star honours for his performance.

According to Yandle, the player who’s on pace to score 28 goals this season would gladly give up a shot to set up a teammate.

“The thing that impresses me the most about him is his unselfishness,” noted Yandle, a veteran of 785 NHL games. “He is a pass-first guy and would rather everyone else get the glory rather than him.”

Off the ice, the soft-spoken Barkov, who leads the league with four shorthanded goals in 2017-18, has shown a flair for dishing out some memorable quips.

“He a treat to be around,” said Yandle of his fellow alternate captain. “He’s a smart guy, speaks three or four languages and gets along with everyone. For such a quiet guy he has some of the best and witty one-liners around.”

Barkov also happens to be one of the game’s top two-way centres, equally adept on both the power-play and penalty kill.

But Yandle sees even better days ahead for the player who’s closing in on his 300th NHL game.

Something the hockey world will get to see when Barkov skates in his first NHL All-Star Game in Tampa January 28.

“Sasha has earned the right to be counted among the League’s elite at the 2018 NHL All-Star Game,” Panthers general manager Dale Tallon said in a statement. “A cornerstone of our franchise, he is among the game’s most exceptional two-way players and is incredibly deserving of this honour.”