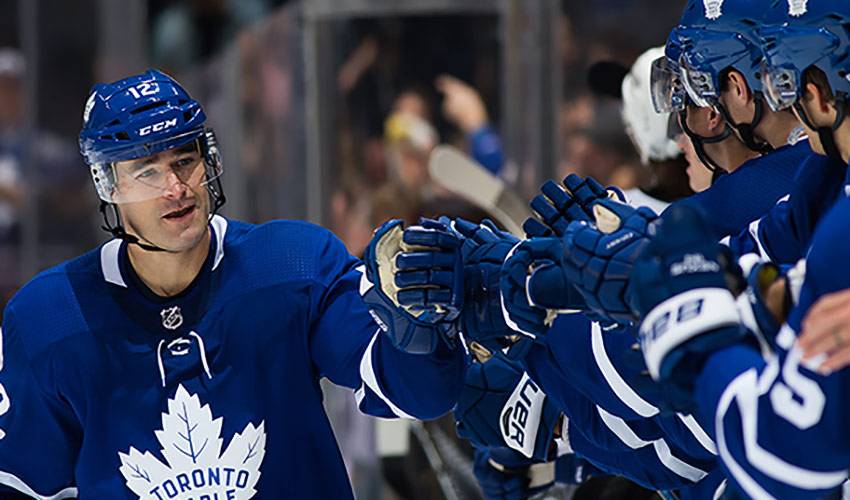 Jake Gardiner hasn’t known the player who recently skated in his 1,500th NHL game for very long. But he certainly feels like he has.

Like everyone else on the Toronto Maple Leafs roster, Gardiner was familiar with Patrick Marleau’s impressive hockey credentials long before he signed as a three-year contract with the team on July 2.

512 goals. 576 assists. Hasn’t missed a game since 2008-09. Marleau, the 38-year-old Saskatchewan native has built a reputation as one of the NHL’s most dependable scorers and durable performers.

The numbers, however, don’t tell the full story of Marleau, who celebrated his milestone game on October 18, a 6-3 Toronto home win against Detroit.

His new teammates will gladly tell you that.

“He is very down to earth and treats everyone he meets with respect,” said the 27-year-old Gardiner. “I haven’t known him for long, but that has really stuck out to me.”

Marleau’s on-ice contributions have certainly stuck out, too.

In nine games with the Leafs, the centreman, who had played his entire NHL career with San Jose prior to coming to Toronto, has recorded four goals and two assists.

But it’s not just what Marleau, the second overall pick of the Sharks in 1997, has delivered on the ice that’s earning rave reviews from his teammates.

The man with a slew of Sharks records to his name, the one who currently stands 18th all-time in games played, manages to make an impression well before each opening face-off.

“The way that he prepares for games is like no one I’ve seen before,” offered Gardiner. “He has a routine that he does every single game and sticks to it. There is a reason that he has been able to stay in such good shape and be in the NHL for this long.”

Small wonder that he’s been a welcome addition to a Maple Leafs team that surprised many last year and have burst out of the gate to be one of the League’s top teams so far in 2017-18.

“He’s a great player,” praised Gardiner. “And he’s an all-around great person, too.”