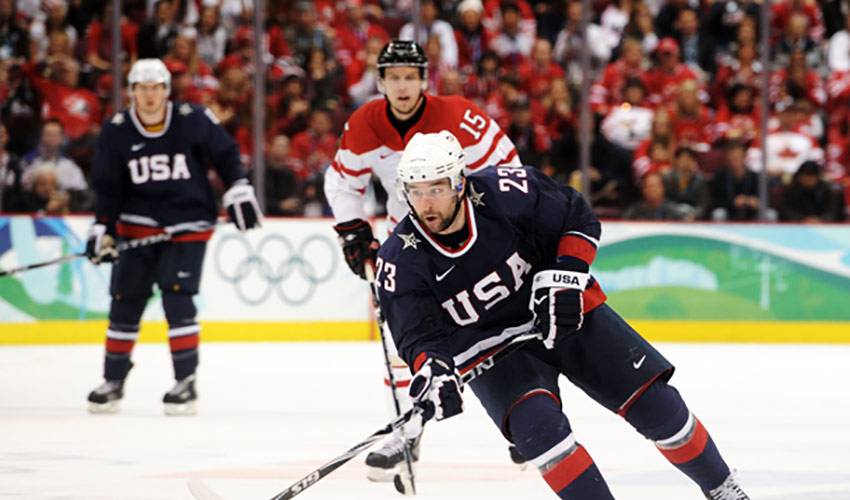 The American squad was not given much of a chance in the months leading into Vancouver, but, my, what a difference a week makes. With Sweden's ouster on Wednesday at the hands of Slovakia, the U.S are the only undefeated team remaining in the tournament and they will face Finland on Friday night with a berth in the finals on the line. Zach Parise has led the forwards, Brian Rafalski the defencemen and Ryan Miller, well, more on him later. Jaime Langenbrunner and Chris Drury have been excellent throughout as well, and Jack Johnson and Ryan Suter have been sublime on the backend. A 5-3 victory over the Canadians on Sunday night gave the American team the #1 seed going into the elimination rounds, and it was a spot that they deserved then and continue to deserve now.

A leading candidate for the Vezina Trophy due to his stellar NHL season to date, Ryan may first receive a Directorate Award as best goaltender of the tournament by the time the Olympics is over. While the States flexed their muscles over Norway and Switzerland twice, it was their netminder who won the game against Canada, admitted to even by GM Brian Burke and head coach Ron Wilson. The shots were 45-23 in favor of Canada and the scoring chances were just as skewed. Yet the Canadians never held the lead in the game, although they had ample opportunity to do so, because Ryan continually shut the door in near-impossible fashion. While down a goal and desperately seeking the equalizer, a late shift by Canada hemmed the Americans into their zone for what seemed like an eternity. The tall and lanky goalie from Michigan was undeterred, making stop after stop and providing the Americans with the win of the tournament to date. With the potential for two more games left, the goaltender of the tournament is in red, white and blue; sporting a neat .944 save percentage and an goal-against-average of 1.25.

The Blackhawks have been tremendously represented in Vancouver, with all six players from Chicago still alive in the tournament and bound for the semi-finals. But, for as good as Patrick Kane, Tomas Kopecky, Marian Hossa, Brent Seabrook and Duncan Keith have played, Jonathan Toews has not only been the best of the ‘Hawks, but he may be Canada's best player when all is said and done. A demon to handle on the offensive boards, Jonathan is a turnover-creating machine who has provided Canada with a bit of everything. He leads the team with seven assists in five games, while registering a +9 and may be the forward Mike Babcock trusts the most. After being asked to match-up with the Alex Ovechkin-Evgeni Malkin-Alex Semin line against Russia, Jonathan not only shut them down, but excelled and out-shined them in the process, assisting on another pair of goals and leaving all three Russians as non-factors. He's killed penalties, won face-offs, kept cycles alive, back-checked, fore-checked and everything in between.

By starting his tournament with two straight shut-outs and keeping Slovakia off the board for a period and a half, Swedish goaltender Henrik Lundqvist added another incredible achievement to his Olympic resume. And this should be one that will keep him in the record books for a while. Henrik held opponents without a goal for 172 minutes, breaking a 50-year old record set by Don Head of Canada in the Squaw Valley Olympics. Henrik's New York teammate Mariak Gaborik broke the streak with a one-timer that King Henry had little chance on, but history had already been made. Congratulations from NHLPA.com on reaching this outstanding accomplishment Henrik!

- Zdeno Chara, captain of the Slovakian Olympic team and the Boston Bruins, discusses what it means to provide 150 British Columbia children with tickets to Olympic hockey games.