Jonathan Quick has been stonewall solid for the Kings early this season; setting club records with his play 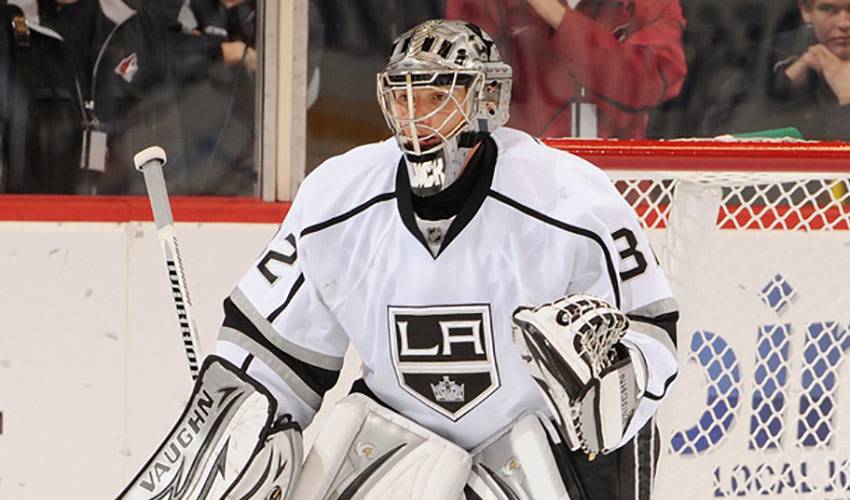 He strung together three consecutive shutouts, performances that earned him front-page headlines in the hockey world and worthy accolades, including the nod as the NHLPA.com Player of the Week. And though his streak came to an end on October 27, Quick's efforts won't soon be forgotten.

Quick became the first goaltender in the Los Angeles Kings' 44-year history to record three consecutive shutouts as defenceman Jack Johnson scored in the third period of a 1-0 victory over the Dallas Stars on October 22.

And while you'd think he'd have plenty to speak about when it comes to his play, Quick, who also owns the Kings longest scoreless streak at 202 minutes and 11 seconds, is by no means a big-talker.

“I think what anyone does, whether it's in your personal life, or your career, is to try and be better. Whether it's being a better person or better at what you do, you strive to for that.”

It's obvious Quick, the 72nd overall selection of the Kings in the 2005 NHL Entry Draft, is living up to his words.

But he's also quick to credit just about everyone else but himself when talk turns to his impressive feat.{{QUOTE}}

In this instance, that would be praising three pipes and all of his teammates.

“That would kind of be it,” laughed Quick, who led Avon Old Farms to two straight New England Prep Championships in his junior and senior seasons in Connecticut. “Obviously, I'm happy that I've been able to contribute something to our team winning. But really, it's that we are winning that is the most important thing. Earning a shutout in one game is great, but the key is to get the two points.”

Especially when the difference in earning a playoff spot or sitting on the sidelines in the both conferences can some down to one game.

“You can't take anything for granted,” said the 25-year-old, who led the University of Massachusetts Minutemen to their first ever NCAA Men's Ice Hockey Championship appearance during his two-season U.S. collegiate career. “We knew we had to be ready to go right from game one. And that mindset doesn't change throughout the year. When you look back at last season and see how crazy it was, with so many teams separated by so little.”

The Kings finished seventh in the West, just one point out of fourth and four clear of tenth.

This year, their path towards another post-season appearance began in Europe, where they played two games, one in Germany, the other in Sweden.

“It was a unique way to begin things and I thought we handled all of it well,” said Quick, who played his first NHL game on December 6, 2007 against the Buffalo Sabres in an 8–2 win. “We have a lot of expectations and each game we play is equally as important.”

Quick is ready to play his part on a team that's pegged as a legitimate Stanley Cup contender.

“Each and every one of us knows what it takes to get to the point where we want to be,” said the goaltender who was named to the United States Men's Hockey Team for the 2010 Winter Olympics in Vancouver, British Columbia, winning a silver medal. “But for as much as you might want to look forward, you just can't in this league.”

Which is why Quick is reluctant to dwell on his past successes.

“You can look at the positives and be confident, but you need to stay grounded and focused on the next task at hand. What matters to me is getting win. Shutouts are nice, but getting two points, I'll take that any time.”

Still, it's a good feeling for Quick in knowing that he's capable of squaring off against the league's best shooters.

But there's on person in particular he won't be upset about giving up the odd goal to.

“She's getting pretty good with the stick, so I won't be surprised if she's able to get one past me,” said Quick, of his daughter, Madison, who'll turn two in March. “She's got pretty good hands.”

So does her dad, a goaltender, not a Hollywood movie star, but a man playing a lead role in Los Angeles' quest for their first league championship.