Small in Stature, Not in Desire 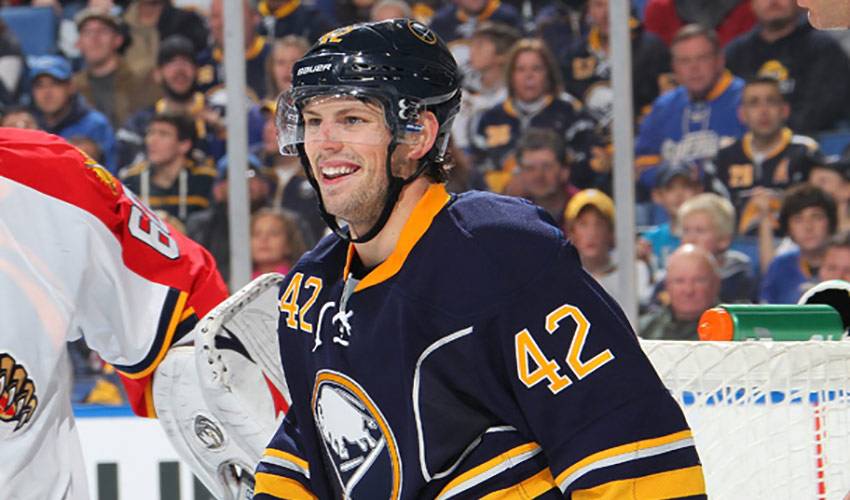 had received several texts, phone calls and emails from friends and family.  But there was one greeting he hadn't expected, the one that came just before the game got underway.Nathan GerbeIn the days leading up to his first NHL game,

Ask Gerbe, now in his second season with the Buffalo Sabres, if he can still recall his first NHL shift and he fires back with a quick response.

“Oh, yes, definitely I remember it,” said the 142nd overall selection of the Eastern Conference club in 2005. “We were playing the Tampa Bay Lightning and I was called on to take the opening faceoff.”

When Gerbe settled into the circle, he looked across and found himself looking at one of his idols, Martin St. Louis, one of the game's most gifted offensive stars.

Prior to the drop of the puck, St. Louis, a veteran of nearly 900 NHL regular season games, had a message for the rookie.{{QUOTE}}

“He looked at me, smiled and said, ‘Congratulations, kid, on your first NHL game,'” recalled Gerbe, of the game on December 6, 2008, a contest the Sabres won. “That was just unbelievable. I'm a smaller guy and so is he. I always had great respect for how he plays the game and the professional that he is. For him to say that…it's something I won't forget.”

After dividing his time between Buffalo and their former American Hockey League affiliate in Portland (Maine) in 2008-09 and 2009-10, Gerbe was given the opportunity to earn a full-time roster spot with the Sabres last season.

It didn't exactly start out the way Gerbe had planned.

“You want to contribute and you want to show that you are capable of producing, but that's not the way it happened at the beginning of the season,” remembered Gerbe. “It was tough at times.”

Gerbe, the man who scored five goals in the final two games of the NCAA 2008 Frozen Four tournament with Boston College, helping lead his team to the championship and most outstanding player honours, went goalless in his first 20 games.

He wasn't the only one struggling. The Sabres gave up a lot of early ground in the standings before they managed to turn things around in the second half of the 82-game schedule.

Gerbe, who was a finalist for the Hobey Baker Award as U.S. college hockey's most valuable player in 2007–08, responded, too.

“I want to be a difference maker,” offered Gerbe, who scored two goals in five seconds against the New York Islanders on January 21, 2011, setting a franchise record for the fastest two goals by one player. “But I only understood, looking back, that in order for you to be successful in this league, you have to be able to be strong when the puck isn't going in and things aren't going your way. I was fortunate to have some great veterans on this team remind me of that, to keep me from getting too down and thinking positively.”

It's obviously worked wonders for Gerbe, who has played well in his sophomore campaign.

As for what would constitute a good game for himself, the 24-year-old native of Oxford, Michigan, is happy to leave those assessments to others.

“That's a tough one because I'm extremely difficult on myself when it comes to my game and what I was able to accomplish,” said Gerbe, who re-signed with the Buffalo Sabres, inking a three-year deal on June 29, 2011. “Hopefully, it would mean that I did something that helped spark the team to a win. I strive to be a player that shows up every night and every shift.”

He also focuses on team goals.

“We've never won a Stanley Cup and that's what everyone in the room wants,” noted the left-winger. “Last year, we started slowly and then came on at the end. We lost in seven games (to the Philadelphia Flyers) in the opening round, but I think we've learned from that. We feel confident in ourselves, but it's a long road to get there. We just have to be consistent in the regular season and then we can go from there.”

Gerbe is eager to play his part.

“I came into this season feeling really strong and confident,” he said. “You can always learn something and be better at what you do.

That's what drives me.”