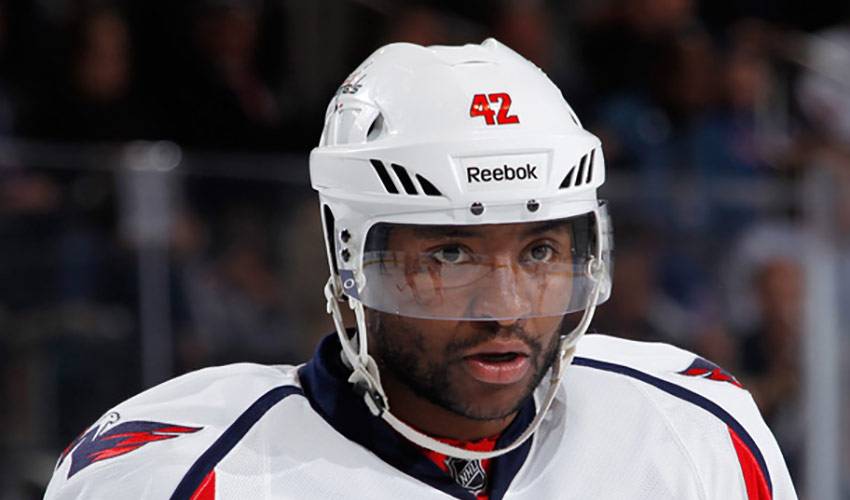 Even though he was the man of the moment in overtime in Game Seven of Washington's Eastern Conference quarter-final series against the defending Stanley Cup champion Boston Bruins, Joel Ward, in keeping with his personality, had humbler goals that evening.

It was, undoubtedly, the biggest tally of his NHL career, as Ward's rebound goal put the seventh-seeded Capitals past the Bruins and into the second round.

The morning after the win, Ward, the undrafted forward who signed as an unrestricted free agent with the Caps in 2011, still couldn't quite fathom what transpired on Boston's home ice.

“To be honest, I was really just hoping to reassure the guys that I could help out and do some good things to contribute,”

Ward told NHLPA.com less than 12 hours after the victory. “I never doubted myself, but I wanted to do more, to help the team the best I could.”

The 31-year-old, who grew up in Scarborough, Ontario, worked overtime, literally, to ensure he achieved what he had set out to do.{{QUOTE}}

And, not surprisingly, Ward, who started his NHL career with the Minnesota Wild during the 2006–07 season, didn't mind going over the goal 2:57 into the extra frame that set up Washington with a date against the New York Rangers in the East semifinals.

Breaking in on a two on one with veteran Mike Knuble on the left, Ward watched intently as his teammate took to his backhand and drove towards the net.

“I knew Mike was coming in pretty hard and I didn't think the opportunity was going to be there for him to pass it,” recalled Ward. “When I sensed there wasn't going to be a pass, I looked for the chance to move in and see if there would be a rebound.”

In one fluid move, Ward quickly shifted from right to left and then seized the chance to take his shot.

“I got into the best position I could, the puck squirted loose and was lying there,” continued Ward. “I took a whack at it and I saw the puck slide to the back pad of the net. It just all happened so quickly. It was then that I said to myself, ‘Wow!' That just really did happen. I knew we had scored and that we had done it. It was a great feeling.”

A feeling that didn't diminish on the flight home or when he opened his eyes the next morning.

“To wake up and realize what happened…well, you can't get much better than that,” said Ward, who signed as a free agent with the Nashville Predators in 2008. “It felt pretty good. I was bombarded with messages from family and buddies back home. It kind of took me by surprise, the impact that it had. It's pretty unbelievable.”

But the 6'1” 220-pounder was quick to point out the play of his teammates, including rookie goaltender Braden Holtby, who came up huge for Washington throughout their series with Boston.

“'Holts,' he carried the load for us,” said Ward, of the 22-year-old backstopper. “For me, it was a five second play. For him, he's been doing amazing things throughout this. He's a great competitor and the other thing is, he's a nice guy, too.”

When the two finally embraced after the win, Ward, who played four seasons with the Owen Sound Platers of the Ontario Hockey League, admitted it was anything but a deep, thought-provoking discussion.

“Well, we screamed like little schoolkids,” laughed Ward. “I think I just told him he's a great goalie. I was just excited for him and all the guys.”

There could be more excitement for Ward, Holtby and the rest of the Caps' players as they look to deliver Washington its' first Stanley Cup championship.

The Caps lost Game One by a 3-1 count to the Rangers on Saturday, but will look to bounce back when the series resumes.

“I'm hoping that all of us can take the confidence we built from the first round and use that in the second round,” said Ward, who played collegiate hockey with the University of Prince Edward Island Panthers of the CIS (Canadian Interuniversity Sport), where he was awarded Rookie of the year honours and named the Panthers MVP on three occasions, while earning a degree in sociology. “I'm just happy to be part of all this.”

A big part of it, even though one of the game's most modest players might see it otherwise.

Player of the Week - Joel Ward

At 31 years of age, the 6’1”, 226 lbs winger brings great size and speed and he is a physical presence who also doesn’t shy away from blocking shots.