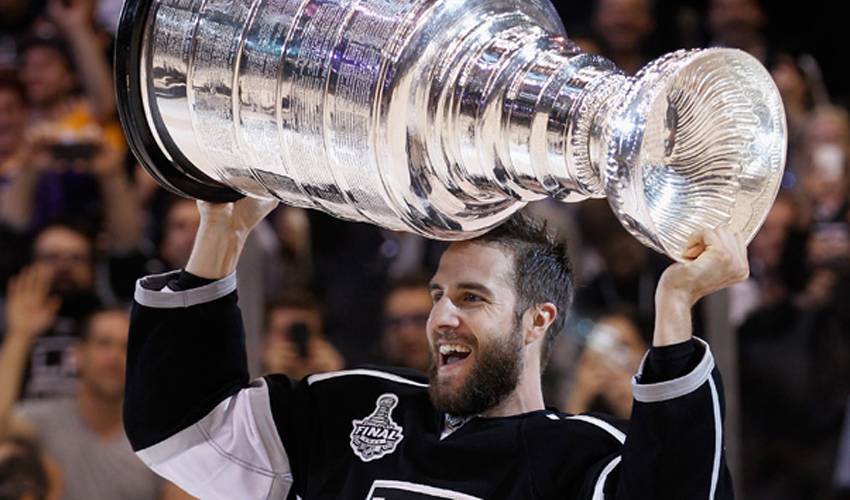 In a season that saw him limited to just 34 regular season and four playoff games, all that mattered to Simon Gagne was the moment he opened his eyes the day after Game Six of the Stanley Cup final.

He's battled the injury bug far too often in his career, dispatched to the sidelines on several occasions to contend with both minor and major ailments.

But despite the setbacks, concussions, hernias, just to name a couple, Gagne sported one of the biggest smiles of his hockey career on June 12, one day removed from Los Angeles' 6-1 Cup-clinching home triumph over New Jersey.

“I think that is the best feeling you could ever know as a hockey player,” said Gagne, who signed a two-year contract as a free-agent with the Kings, as an unrestricted free agent, on July 2, 2011. “The night before…it's just so hard to put that into words. But the next morning when you open your eyes and tell yourself it wasn't a dream, it was amazing. It's real. It happened.”

What was he thinking in the waning seconds of the game and in the aftermath of Los Angeles' first championship?{{QUOTE}}

“You think of all the sacrifices you made along the way, all the hard work, the ups and downs,” offered Gagne, who was the 22nd overall selection of the Philadelphia Flyers in the 1998 NHL Entry Draft. “Sometimes, it looks easy, but it's not. Then, when you lift that Cup over your head, you are overjoyed. You think about everything you did to get that point, things like your parents waking you up at five in the morning to take you to practice, all the training in the summer months. There were injuries, surgeries, times when you felt down, but you always loved the game. I still can't believe it.”

For Gagne, who has won silver medals at the 1999 World Junior Championships and 2005 World Championships, while winning gold at the 2002 Winter Olympics and a World Cup championship in 2004, sharing the win with those closest to him was particularly meaningful.

“To have my family there and the kids on the ice with me after we had won, I was so happy to see how excited everyone was,” said the Quebec native, who has appeared in two NHL All-Star Games and has also won two Flyers' MVP awards. “You enjoy it and you embrace it.”

Gagne, who returned to the ice in Game 3 of the finals after being out since December 26 with a concussion, was also thrilled for his teammates.

“We needed to figure it out,” said the 32-year-old, in acknowledging the up and down regular season the Kings endured. “And we found a way. It felt like we were playing playoff hockey the whole way through. When Darryl (head coach Sutter) came in, he was able to push the right buttons at the right time. Everyone just elevated their play in the playoffs. (Goaltender) Jonathan Quick was just unbelievable. Our veterans really stepped up and so did the younger guys, too. We took things to the next level.”

The seven-time 20-goal scorer, who scored a career-best 47 goals for the Flyers in 2005-06, netting 41 more the following campaign, was simply grateful to get the chance to play again.

“It's never fun being away from where you wish you were,” said Gagne, of his first season in Los Angeles. “You just want to get back and be able to contribute something. Everyone is very supportive and it was nice to finally be back. I just wanted to do whatever I could to help.”

Now, he'll have the chance to spend a day with the Cup. Although the date hasn't been set, Gagne wouldn't mind having it on-hand at the charity golf tournament that bears his name, on July 12.

“That would be great,” he said. “It would be a perfect day. The best part is that we were able to achieve something that all of us dreamed about when we were kids. It is the toughest trophy in all of sport to win.”

As for the best part of seeing his name etched on the Cup, Gagne took brief pause and then delivered his answer.

“It means that no one can take that away from you,” he said.

Gagne Hopes to be a Spark for the Lightning

After battling some injuries early in 2010-11, the offensive forward is eager to make his mark in Tampa