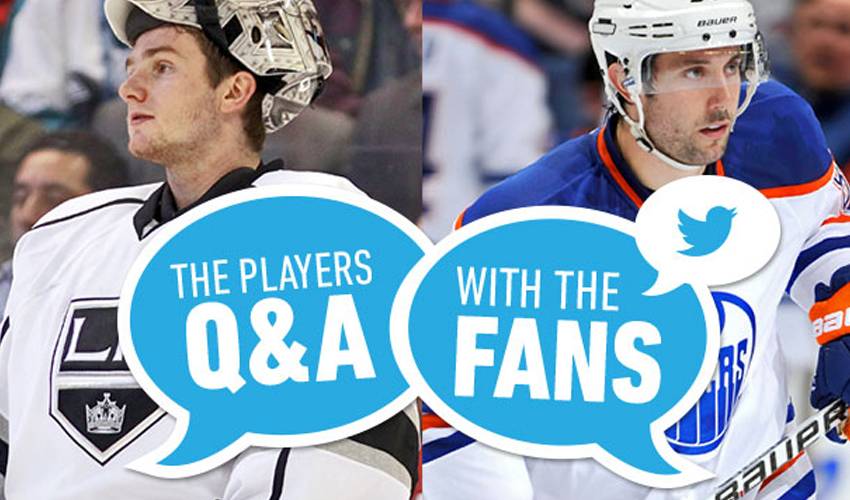 Stanley Cup champ and goaltender for the Los Angeles Kings, Jonathan Quick, had a free block of time on Thursday, January 4th and decided he’d take to Twitter and answer a batch of burning fan questions.

Quick tweeted, “Got some time to answer questions here, try to get to as many as I can, sorry in advance for clogging up everyone’s feed.”

Seconds later, he received a wave of fan asks that ranged from “who paints your mask?” to “strangest thing you’ve autographed?” Some of his answers are really funny too.

Here are a few favourites:

“@meinspatrick: Do you hate it when u hear goal horns from other teams?” not really, catch myself singing along to Chicago goal song #catchy

“@jdhockey526: Do you ever leave an open hole knowing the shooter will take the bait?” I leave open holes often, very rarely on purpose

“@pvkansler17: @jonathanquick32 strangest thing you have ever autographed??” grilled cheese

“@glasnost9: @jonathanquick32 What do you sharpened your skates at?” 3/8

“@antzz31: @jonathanquick32 if you had to say your success in your career came from one thing, what would it be?” great teammates


Quick’s teammate Willie Mitchell chimmed in on one answer:


When asked why he decided to spend his afternoon chatting with fans, Quick commented:


"I think it's great to connect with our fans any time we can. The support they give the players does not go unnoticed."


The Edmonton Oilers’ Sam Gagner also got in on the action by tweeting, “Saw @JonathanQuick32 is volunteering his time for a Q&A. I don’t have any questions for him per se, but I do like the idea. So fire away.”

It didn’t take Gagner fans long to send him their questions either, and Gagner answered a wide variety of them as well.

@schumacherlo89 For me, its Nuge, just because he doesn't defend himself ever. He's too nice haha.

@emmoretto Peter Forsberg, he could do it all.


Teammates Jordan Eberle and Taylor Hall even took a moment to pose questions:

@89sgagner who is the best roommate you have had?


If you’re interested in reading their full Q&A sessions, head over to their twitter accounts @JonathanQuick32 and @89SGanger for more. Back in November, Kevin Westgarth, David Backes, and Mathieu Schneider did a similar session on Reddit.com. Check out that full Q&A here.