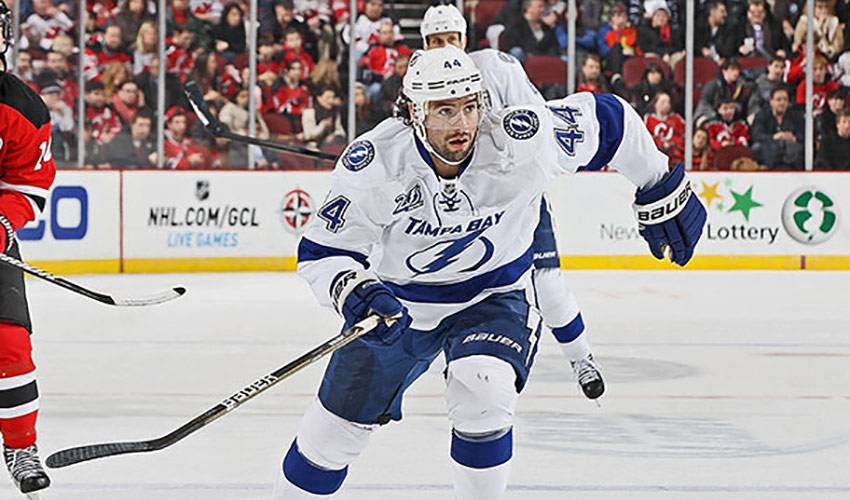 There are 3,795 miles between Nate Thompson’s hometown of Anchorage, Alaska and Tampa, Florida, his NHL hockey home. His journey to get where he is has been a most interesting road traveled.

A product of Seattle of the Western Hockey League, Thompson’s big-league career was far from assured. His four seasons with the Thunderbirds were defined by solid offensive contribution (he averaged 36 points per campaign), strong defensive play and a willingness to do the things that didn’t show up on the scoresheet. It was the Boston Bruins who drafted Thompson, taking him in the sixth round, 183rd overall, in the 2003 Entry Draft. By 2006-07, the centreman had appeared in a grand total of four NHL games. Prior to the start of the 2008-09 season, on October 8, 2008, Thompson was claimed off waivers by the New York Islanders. “When you are young, the one thing you hope for is to be drafted,” said the 6’0”, 205-pound forward. “But it doesn’t really guarantee anything. All you can do is work hard at your game, stay positive and hope a break comes your way.” That break Thompson was looking for came on January 21, 2010, the day he was claimed off waivers by the Tampa Bay Lightning. Once again, there was no certainty he would net a regular roster spot. In 32 games with the Lighting, he contributed one goal, three assists, complemented by dependable defensive work. One season later, however, something clicked. “There really is no magic formula for why things turned out the way they did,” said Thompson, who scored 10 goals and posted 25 points in 79 games in 2010-11. “It all comes down to confidence. It’s not just how you feel about yourself and what you are able to do, but the confidence your teammates and the organization has in you.” Last year, in 68 games, Thompson had nine goals and 15 points. Many of his contributions, though, didn’t translate into points. His efforts, however, did grab the attention of his teammates. “When you come back from a shift, whether you won a big faceoff, maybe delivered a big hit, or blocked a shot, you’d feel a tap on your shoulder and hear things like, ‘Great shift’ or ‘Way to go.’ When you have players like Steve Stamkos, Martin St. Louis and Vincent Lecavalier doing that, it’s almost surreal. It’s a great feeling.” His teammates haven’t been the only ones to take notice. On March 23, he signed a four-year extension with the Lightning. "We're very pleased to have agreed to a contract extension with Nate," Tampa Bay general manager Steve Yzerman said in a statement. "He has and will continue to be a very important member of our team both on and off the ice." Thompson, who returned home to play with the Alaska Aces of the East Coast Hockey League during the 2012-13 lockout, didn’t always think he’d find himself in this position. “There have been ups and downs, the waiver process and playing in the minors. But I stuck with it. I guess the little things you do in a game can sometimes be seen as big things. It’s really great to finally be at this point.” Hardly an easy journey, but one Nate Thompson took in stride.