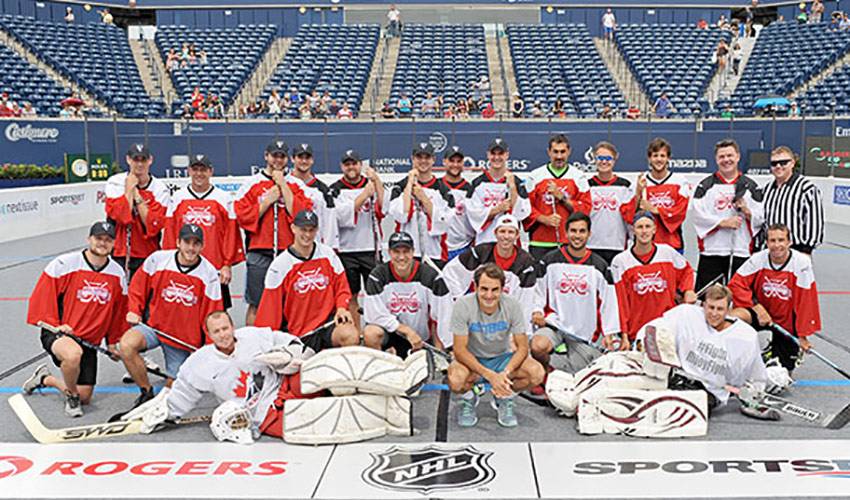 An avid tennis fan – he regularly attends the Canadian Open and has been to several ATP events – Spezza jumped at the chance to play in a recent charity ball hockey game that featured several NHLPA members and seven-time Wimbledon champion Roger Federer.

Even better, the 31-year-old veteran of 686 NHL regular season games had Federer as his teammate.

“I love watching tennis,” said Spezza, who started playing the game himself about six years ago. “I’ve been lucky enough to meet some of the best players in the world. So, when you are able to hang out and play some hockey with a tennis great like Roger Federer, it’s pretty cool.”

Although he openly admits his skating skills are lacking, Federer is a fan of the game. He even showed some offensive flair on a court he’s known more for smashing forehand and backhand winners, netting an impressive goal in the celebrity match.

Spezza, known for his solid set-up skills, wasn’t on the court for Federer’s tally.

“I took a long shift just before he scored, so I was on the bench,” joked Spezza. “But, it didn’t matter. It was just amazing to say you played with Roger Federer. I just didn’t want to be the guy out there that hurt him.”

The two even managed to talk a little hockey that night.

“I mentioned that I played in Switzerland (with the Rapperswil-Jona Lakers) during the lockout a few years ago and he told me that his hometown wasn’t too far from where I was,” said Spezza, who had 30 points in 28 games with the Swiss club. “He was very easy to talk to, a nice guy that really enjoyed the charity game and meeting with the players.”

Spezza has rubbed elbows with other tennis stars as well, including two others that have held the world’s No. 1 ranking.

“I’ve met Novak Djokovic and Rafael Nadal,” noted Spezza. “What you see is what you get with Djokovic. He’s a very energetic, enthusiastic and an upbeat guy. He’s really funny. Nadal was very laid-back. He’s a great guy, too. You don’t have a long time to chat when you meet them, but they are very gracious and down-to-earth.”

Don’t expect Spezza to be making a push to join Federer on the court any time soon.

“I’d love the chance to get out there with him for a doubles match, but there would have to be some considerations first,” he laughed. “If he could do all the serving, that would really help. That’s definitely not the strongest part of my game. But, I really enjoy the game, watching it or playing it.”

While he won’t be courting success on the ATP Tour, Spezza’s hoping Dallas comes up aces in 2014-15.

“It’s been a good summer, and just like the rest of the guys, I’m really looking forward to getting back on the ice.”

And, if the Stars happen to align, Spezza just might net his first Stanley Cup win.