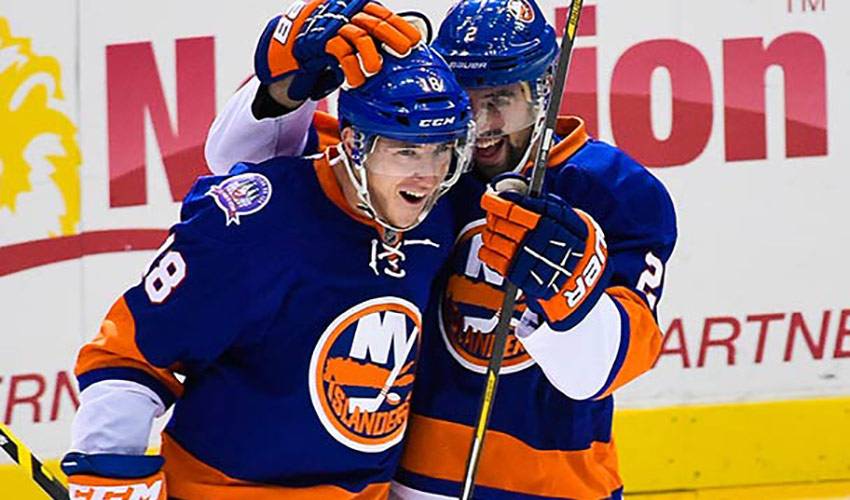 “It was a pretty good one,” said Strome, who had 18 points in 37 games last year for the Isles. “I picked it out of the net and told a few of the guys I should keep this one, put it somewhere where I can remember my first one of the year.”

Thirteen games into the 2014-15 campaign, the 21-year-old has a plus-three rating and eight points, all assists.

Is it his generous nature that’s kept him from lighting the lamp so far?

“That must be it,” joked Strome. “Let’s go with that. Of course, I would love to have a few, but the most important thing to me and to everyone on this team is where we are in the standings.”

Playoff success has been elusive for a franchise that has won four Stanley Cups. The Islanders ended a six-year post-season drought when they clinched a spot in 2013.

“There have been frustrating times,” said Strome. “I haven’t been here as long as other guys who have been part of that. Before the season started, there was a feeling that we could be a group that changes that. No one wanted it to be about talk. We all wanted to go out and make it happen.”

So far, it’s been an up and down campaign for a group eager to establish a new identity.

“It’s been a different guy stepping up and making a difference,” noted Strome. “Whatever we can do to take the stress off Johnny (captain, Tavares) and Kyle (alternate captain, Okposo), that will only help us be successful. We want teams to look at us differently. We want to be a tough opponent to go up against.”

That mentality starts at morning practice.

“You can see that attention to detail every time we prepare,” offered Strome. “Everyone is focused. If we lose, it doesn’t sit well with anyone. You can see that everyone was tired of losing and wanted to do something to change that.”

But, it’s not all business all the time.

And just how fun it would be if the Isles’ up-and-coming star’s first goal of the season turned out to be the game winner?

“That would be fine with me,” said Strome. “The guys haven’t teased me at all about it this year. When I do get that first one, I wouldn’t be surprised if they razz me about it.”

Not that Strome would mind it in the least.

“Everyone supports one another,” he said. “That’s the way it is here. But, the focus is on winning. That’s the No. 1 priority.”