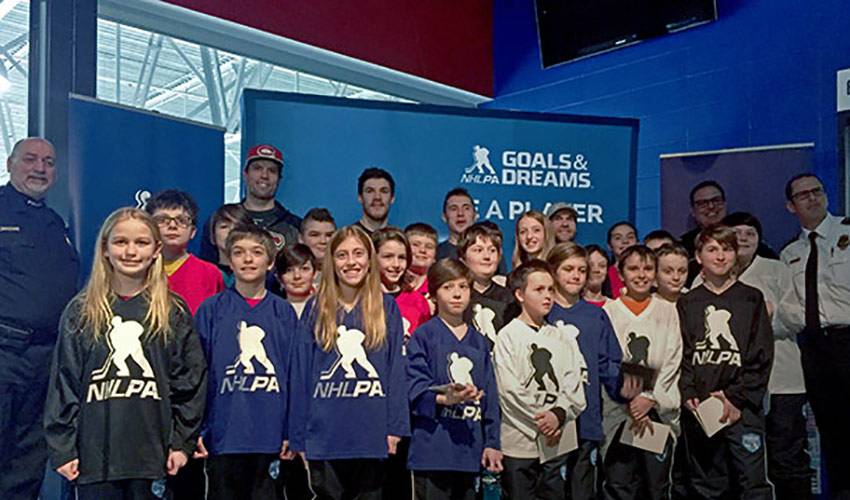 The kids who are a part of the Deux-Montagnes Police Force Hockey Program in Montreal, Quebec, were thrilled recently when they were outfitted with 25 brand new sets of hockey equipment courtesy of the NHLPA Goals & Dreams fund.

They suited up Monday wearing their new gear and hit the ice for their practice at the Bell Sports Complex in Brossard, but had no idea the greatest moment was yet to come.

Following their own team practice, which the group of children were lucky enough to watch from the stands, the players spent time with the young children to sign autographs and pose for photos. Christopher Harding of the Deux-Montagnes police and Chris Campoli of the NHLPA were also on-hand for the event Monday.

Shea, Andrew, Brendan, and David get a big thank you from the @RegiePoliceLDM kids today in Brossard for their G&D donation. 🏒 pic.twitter.com/KckjfSfQU4

NHLPA Goals & Dreams has donated over $23 million to grassroots hockey programs around the world since 1999, when it was launched as a way for the players to give back to the game they love while ensuring that deserving kids have every opportunity to play. More information here:

Traded to the Edmonton Oilers from the Montreal Canadiens on February 28, David Desharnais wanted to come up big when he took to the ice for his first game with the Western Conference club on March 4.

Shaw Gets His Kicks

Andrew Shaw launches both the ball, and his shoe, through the uprights in front of a large crowd at Soldier Field in Chicago