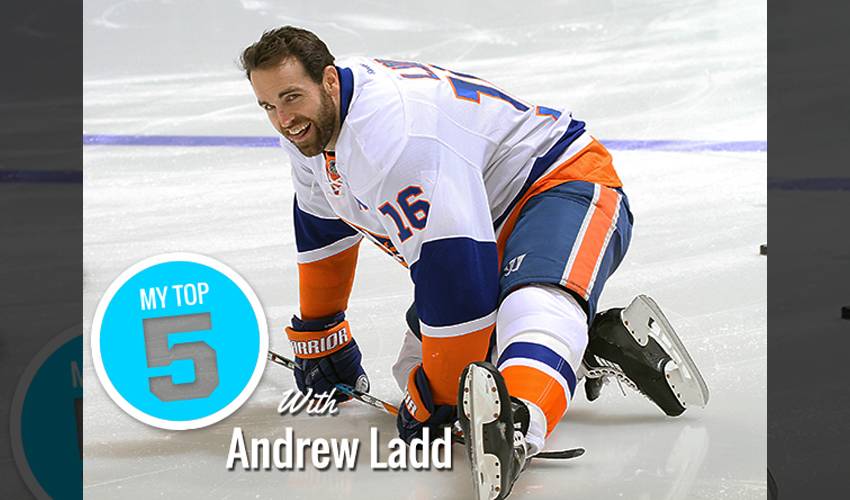 A veteran forward and two-time Stanley Cup champion, B.C. native Ladd is skating closer to the 850 games-played mark. Before he resumes the playoff chase with the New York Islanders, the 31-year-old alternate captain offered up his favourite athletes of all-time.

Which Hall of Fame NHL star made Ladd’s list? Here’s a hint: he retired from the game two days after turning 40, and counts the 2001 Ted Lindsay Award among his impressive trophy haul.

“Growing up, I was a big fan of Joe Sakic. I really respect the way he handled himself. He is a quiet guy, but the way he went about his business was impressive. And his release – he was able to get the puck off his stick so quickly.”

2. Tearing a strip off his competition

“Watching Tiger Woods dominate the competition like he did was pure enjoyment. You remember those days when he’d destroy the field. It was fun to watch.”

“You could say the same thing about Michael Jordan. He was just amazing to watch, the way he could take over a game and just dominate. I remember when the Vancouver Grizzlies were in the NBA, if Michael Jordan came to town, there was a huge buzz in the city.”

“To see Roger Federer still playing great tennis is fantastic. The longevity, his will to win – you have a lot of respect for what he’s been able to achieve.”

“Tom Brady is another example of an athlete who has played the game for a long time and is still a dominant force. He’s a player who always finds a way to come up big when the game is on the line.”