Dominik Hasek and the Czech Republic will celebrate the 20th anniversary of their own version of the Miracle on Ice a year from now. Hasek reminisces how he and his countrymen shocked the hockey world with a gold-medal victory in Nagano in 1998. 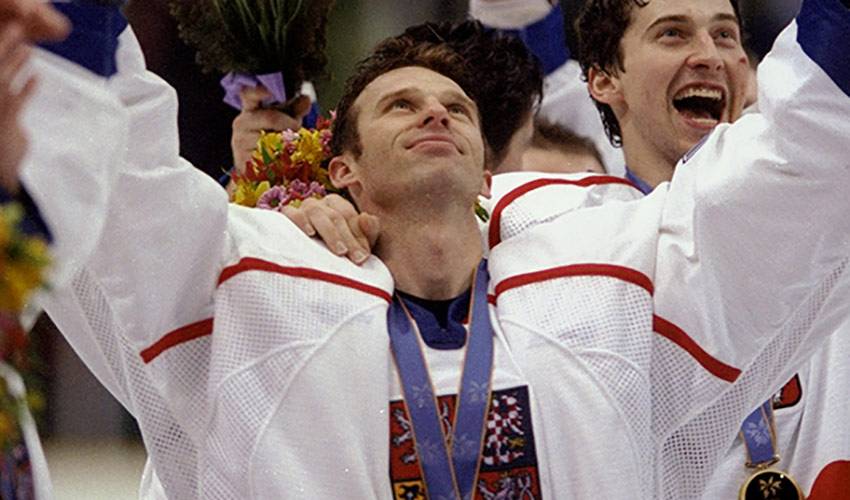 Dominik Hasek and the Czech Republic will celebrate the 20th anniversary of their own version of the Miracle on Ice a year from now.

The Hall of Fame goalie and his fellow countrymen shocked the hockey world with a gold-medal victory in Nagano, Japan in the first Olympic Games that saw the participation of NHLPA members. 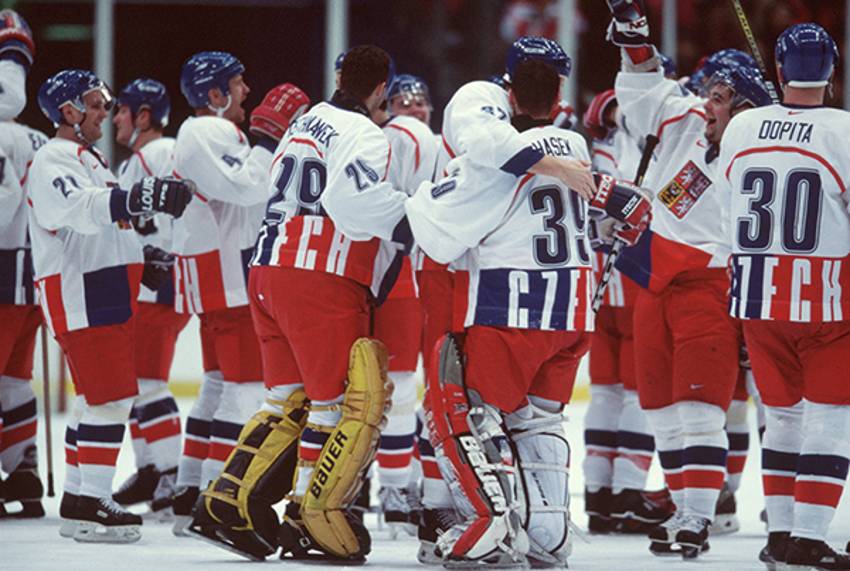 The Czechs were not among the favourites when the best players in the world gathered in Nagano. The United States had defeated Canada in the 1996 World Cup of Hockey, Canada had won the 1997 World championship, the Soviet Union/Russia were the Olympic victors in 1984, 1988 and 1992, while Sweden was the defending Olympic gold-medal champions for its win in 1994.

The United States, Canada and Sweden were considered the favourites in Nagano and after Canada and Russia went a perfect 3-0 in the preliminary round. Those two powerhouse hockey countries appeared to be on a collision course to meet in the final.

But the Czechs had a wild card in the 33-year-old Hasek. In 1996-97 with the Buffalo Sabres, he won the Lester B. Pearson Trophy (now the Ted Lindsay Award) and became the first goalie to win both the Hart and Vezina trophies since Jacques Plante in 1961-62.

Hasek’s 1996-97 season started slowly with the Sabres. But his season began to turn around on Dec. 1. He went 14-8-7 in his next 29 outings with a .946 save percentage and six shutouts. It was perfect timing with the Olympics on deck.

Before boarding the flight to Japan Hasek reeled off an eight-game undefeated streak at 4-0-4. He returned from Nagano on a high to register two more shutouts in his first three games back, including a 32-save 1-0 shutout win against Wayne Gretzky and the New York Rangers.

"He's the best player in the game," Gretzky said after that game, a week after Hasek’s golden moment in Nagano. "He's just sensational. Very few times in sports do you see guys get to the level other people aren't at. For the game itself, it's good to have guys who dominate and he's dominating right now."


Hasek took time over the weekend to reminisce about the Czech Republic’s first gold in men’s hockey.

I was hot for two months before Nagano. I was not playing well and then I tried to concentrate on every shot because the next one might be a goal. But I never thought ‘I'm hot’ because you never know what's going to happen in the next minute.

Before the tournament began we knew we weren’t among the top teams, but my hope was if we could bring a medal back home I would be happy.

The Czechs were in Group D with Russia, Kazakhstan and Finland. Hasek blanked the Finns 3-0 with 17 saves in the opener and two days later defeated Kazakhstan 8-2. The Russians beat the Czechs 2-1 in the first-round finale.

The Olympic tournament goes by so fast, so you don’t want to think down the road, you want to take it game-by-game. We felt good about our team after the preliminary round. Our only loss was to Russia. We had confidence and spirit going into the medal round.

But we probably played our worst in the first period against the U.S. in the quarterfinals. We were lucky to be down only 1-0. When we got to the room after the first period, Vladimir Ruzicka, said something important. He didn’t even stand up, but he was the oldest player [three months shy of his 35th birthday] on our team and he was a leader. Everybody listened to his short speech. It was a simple: just to stick to the system and play better defence. Everything changed after that. We played our best after that.

The Czech Republic went on to upset the U.S. 4-1. Hasek wound up making 38 saves. Now it was on to the semis and a date with Canada. It was a goalie duel between Hasek and Patrick Roy, but Canada had carried the play.

The Czechs finally broke the goal-less game midway through the third period when defenceman Jiri Slegr drifted a shot over Roy’s right shoulder. But Canada found a way to finally beat Hasek. With Roy on the bench for an extra skater, Eric Lindros fed Trevor Linden, whose shot deflected off the stick of Czech defender Richard Smehlik.

Ten minutes of overtime settled nothing, so it was on to a shootout. Hasek had made 24 saves and would stop in order in the shootout Theo Fleury, Raymond Bourque, Joe Nieuwendyk, Lindros and Brendan Shanahan in the shootout. Robert Reichel beat Roy with a stick-side shot on the Czech’s first attempt and only goal.

We didn’t use any video. But I knew these guys from all-star games and playoffs and the regular season in the NHL. I knew their tendencies to shoot or deke. The only guy that surprised me was Lindros. He deked and almost beat me.

Lindros’ had beat Hasek, but the Canadian captain’s backhand glanced off the crossbar and bounded safely into the corner.

All I remember from that shootout was I was trying to stay focused because I was tired. In between shots, I went to our bench to sit and rest. I wouldn’t even watch our shooters. I would just watch the reaction from my teammates.

I didn’t think much at the time about Wayne Gretzky not being one of the Canadian shooters. But later I thought it was strange.

The Czechs clashed with the rival Russians in the gold-medal final. The game turned out to be a defensive struggle. A Petr Svoboda slap shot with 12 minutes remaining in regulation time was the game’s only goal to give the Czechs the victory. Hasek made 20 saves for the shutout. He had yielded only two goals in 190 minutes of playoff-round action.

The final was a game of survival. Robert Reichel was one of our leaders and he said before the game ‘we’ve made it this far, why not go all the way.’ We knew the first goal was going to be important.

But I was beginning to wonder whether we were going to win. It seemed luck was not on our side. Jaromir Jagr hit a post. We missed a breakaway. We had two or three really good chances, but could not score.

Then Petr scored and it was crazy. It was crazy after the game on the ice, in the dressing room and back at the Athletes’ Village. There were so many phone calls and the fax machine never stopped with congratulation messages. 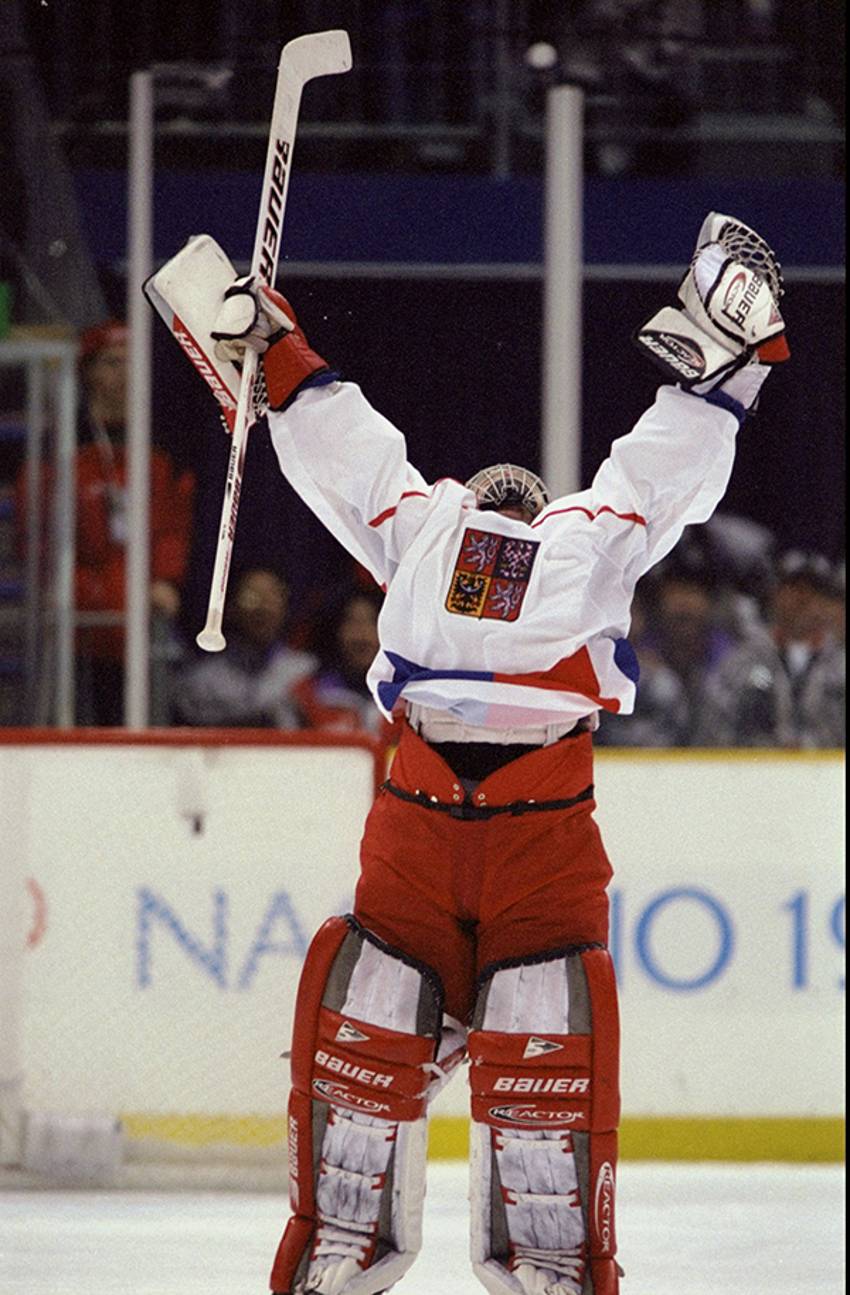 There also was some confusion if we could go back to Prague to celebrate or did we have to go back to North America immediately to rejoin our teams. We eventually flew to Prague.

More than 150,000 showed up to the Old Town Square in Prague to party and welcome back the hockey heroes.

Even all these years later it’s so hard to describe. It was a fantastic celebration, the biggest for my country since the revolution in 1989. We played for our country and we felt the pride of our country. We felt like the Beatles.