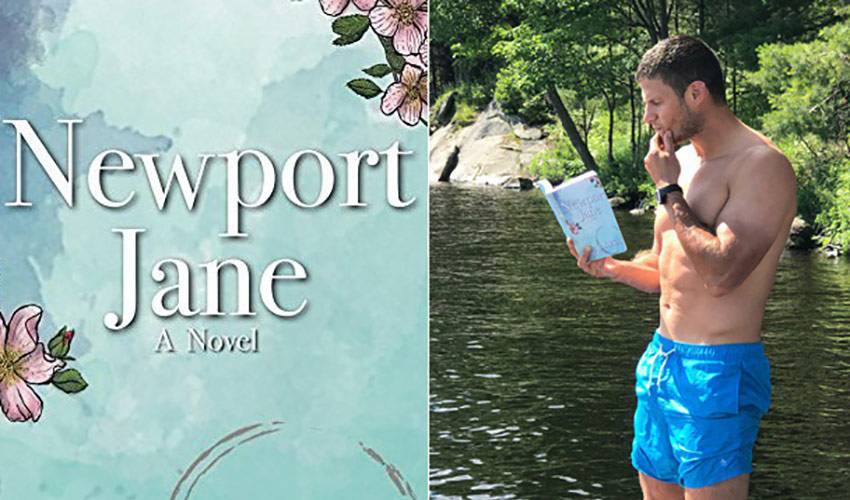 For years, Katie Bieksa had a novel idea in mind. Now, she’s finally seen her longtime dream become a reality.

It’s something that’s admittedly still difficult for Bieksa to wrap her head around – seeing her name on the cover of the book she wrote.

Described as a, ‘thrilling, delicious and sometimes heartbreaking journey into the darkness of the fears we all share and the wreckage they can leave in their wake,’ Newport Jane has garnered excellent reviews since the book was released on June 14.

“I’ve always wanted to write a novel,” said Bieksa, who has her degree in English Literature and Women’s Studies. “With having babies, moving to California and other things that came up over the years, it just wasn’t the right time to do it until now. It took seven months to write and it was a really great experience. I wanted the novel to be something that women could relate to and I think women’s fiction is a good genre. I’m happy with the way it turned out.”

Bieksa was joined by her husband, Kevin, who has appeared in 749 NHL regular season games, for a recent book signing in Vancouver.

The former Canucks blueliner also posted a photo on Twitter – novel in hand, while on a paddleboard – to herald the novel’s release.

Summer reading at the Lake #NewportJane Yes, this is how I usually read 🙄#iknow #thatguy @chaptersindigo @amazon pic.twitter.com/pvg9BFKt76

No need to ask how thrilled he is for his wife.

“I felt super proud when the book arrived at our place,” said Kevin, who played 597 games with Vancouver before a trade to Anaheim in June of 2015. “Seeing her name on it, that was a great moment.”

The veteran defenceman has had conversations with people, inside and outside of the hockey world, since the book came out.

“Katie’s had to sacrifice a lot over the years,” said Kevin. “Raising the kids and putting her career on the back burner – she’s always been very supportive of me. She might downplay the feedback, but I’ve talked to a lot of people – renowned writers in Canada who have received accolades for their work – and they are huge fans of the novel. I’ve also had the chance to speak with people in the game, other husbands and wives, and they are also really impressed by it.”

So, too, are many others.

The book, which has a star rating of 4.6 on goodreads.com, has elicited these comments:

‘I couldn't put this book down! Newport Jane is a FANTASTIC read!!’

‘That's not to say Newport Jane is all serious. In fact, it's almost all a lot of fun, with California-style glamor and intrigue, lots of laugh-and-cry-at-the-same-time moments, and a stop-your-heart scene it is impossible to see coming.’

Seeing the book resonate with so many people continues to amaze its author.

“It’s a mix of funny, sexy and serious,” she said. “It’s one of those summer read-type books. I’m really humbled by the reaction it has been getting.”

“I’m looking forward to getting back to writing again,” she said. “It’s just something I’ve always enjoyed.”

The Way They Worked

Bieksa Has Made An Impression

From his nerve-riddled first game to the bond he has developed with the city of Vancouver, Kevin Bieksa is making his mark

This month, the seven Canadian NHL clubs and their players are bringing a difficult topic to the forefront of the hockey season: mental health and wellness awareness and education.

Player of the Week - Kevin Bieksa

Despite the absence of NHL hockey due to the owners’ lockout, Kevin Bieksa has found creative ways to lace-up his skates.

A Genuine Dedication To Charity