Who led the way in the category in 2016-17? Hint: This Ottawa forward bested his nearest rival by a baker’s dozen. 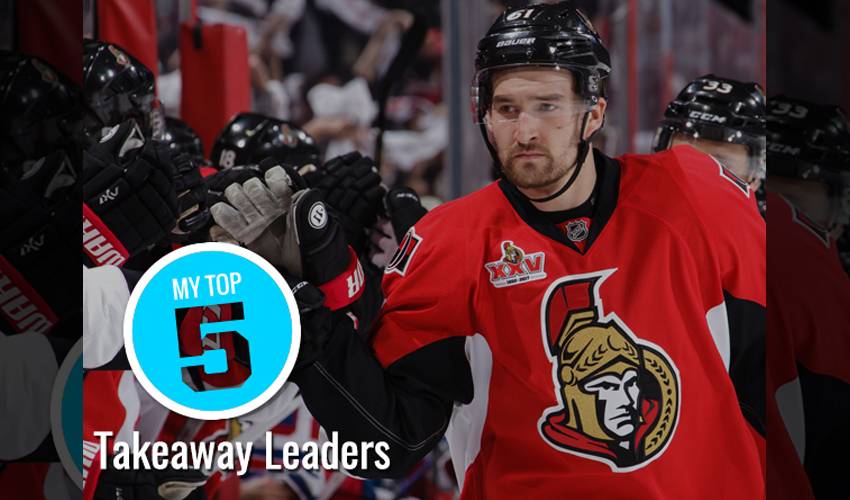 What’s the biggest takeaway when it comes to these five players? For starters, they are at the top of their game when it comes to takeaways. There was also a tie for third spot on the list, including a rookie that lit the lamp 40 times.

Who led the way in the category in 2016-17? Hint: This Ottawa forward bested his nearest rival by a baker’s dozen.

Stone gave the Senators solid offence, netting 22 goals and recording 54 points in 2016-17, but he was equally impactful on the defensive side. Finishing sixth in voting for the Frank J. Selke Award, the 25-year-old had a league-best 96 takeaways, 13 more than his closest competition.

Carolina’s rock-steady defenceman posted 34 points and a solid plus-23 rating in 2016-17. The Colorado native, who appeared in all 82 regular season games, had 83 takeaways for the Hurricanes, an improvement of 29 over his rookie campaign.

Nashville’s standout centreman was stellar in the Stanley Cup Playoffs, recording 16 points in 22 post-season games. In the regular season, Forsberg reached the 30-goal plateau for the second straight campaign, while also posting a career-best 76 takeaways.

Edmonton’s superstar captain was on the top of his game throughout the 2016-17 season, leading the league in assists (70) and points (100). McDavid, whose trophy haul included the Ted Lindsay Award and Hart Memorial Trophy, notched 76 takeaways.

The 2017 Calder Memorial Trophy recipient led the league with 32 even-strength tallies, totaling 40 goals and 69 points for the Toronto Maple Leafs. Matthews also blocked 61 shots and had 76 takeaways in his impressive rookie NHL season.