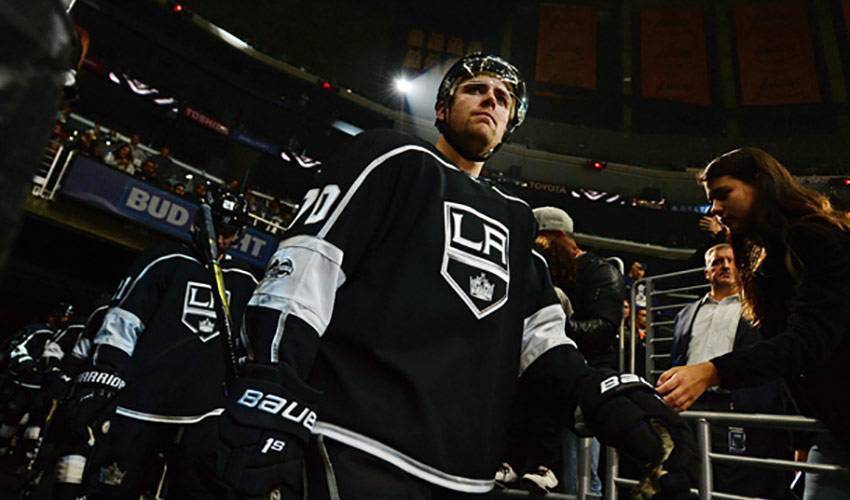 There is something about glancing over at the Sharks bench and the sight of San Jose head coach Peter DeBoer and his trusty assistant Steve Spott that enthuses Pearson.

Since DeBoer took over the Sharks a couple seasons ago, Pearson has checked in with three goals and seven points in nine games against San Jose.

“When I look over there and get a nod from them I always smile back,” Pearson said. “Last year, it was a pretty good feeling and I think there were getting sick of me scoring.”

Even though the Sharks coaches are 24 years older than Kings fifth-year forward, the three have been friends for a decade.

It all began when Pearson’s sister, Ali, was working for the hometown, the Kitchener Rangers, the junior team powerhouse that was run by DeBoer and Spott.

The brother and sister had been around hockey all their life. Their father, Tim, has worked for the equipment giant Bauer for 26 years, and as a result, Tanner had met many of the game’s best. Tim also was friendly with the Rangers legendary head trainer Dan Lebold.

So hanging around the Rangers because his sister was there, Tanner landed a job as stick boy, or as assistant equipment manager as he likes to describe his position.

Inside the Kitchener dressing room and on the bench, Pearson learned so much that has benefitted him in his rise to a Stanley Cup champion.

“All the guys treated me so well,” Pearson said. “What I learned was how to conduct myself, how hard you have to work and what it takes to be a champion.”

The 2007-08 Rangers won the OHL championship with a 4-1 victory at home against the Belleville Bulls in a seventh and deciding game. They also hosted the Memorial Cup tournament, advanced to the final, but lost 4-1 to the Spokane Chiefs.

To this day, Pearson gets a strange feeling when he goes up against former Rangers like St. Louis Blues defenceman Robert Bortuzzo, Toronto Maple Leafs centre Nazem Kadri, Nashville Predators defenceman Yannick Weber and Sharks forward Mikkel Boedker because this group meant so much to Pearson.

Nothing came easily for Pearson in the beginning of his playing days. In fact, he has been a poster child for perseverance.

He played junior B for the Waterloo Siskins and one of his opponents was another Kitchener native, Mark Scheifele, who lined up for the rival Kitchener Dutchmen.

The two joined the Ontario Hockey League’s Barrie Colts the following season, but while the Winnipeg Jets selected Scheifele seventh overall after their rookie seasons in Barrie, Pearson went undrafted.

He wondered why. But Pearson received a huge boost of motivation when Colts head coach Dale Hawerchuk, a Hockey Hall of Famer, told Pearson in summer phone call that he could not only become a top-six forward in the OHL but he could lead the league in scoring.

With Scheifele starting the 2011-12 season with the Jets, Pearson took advantage of an increased role and increased ice time. Just as Hawerchuk told him, Pearson did lead the OHL in scoring by the time Hockey Canada sent out invitations for the world junior team in early December.

He made the Canadian team and sixth months later the newly crowned Stanley Cup-champion Kings drafted Pearson with the final pick of the first round, even though he broke his leg in the Colts regular-season finale.

“What kept me going? I wanted to make hockey my life,” said Pearson, who will never forget those early days with DeBoer, Spott and the hometown Rangers.